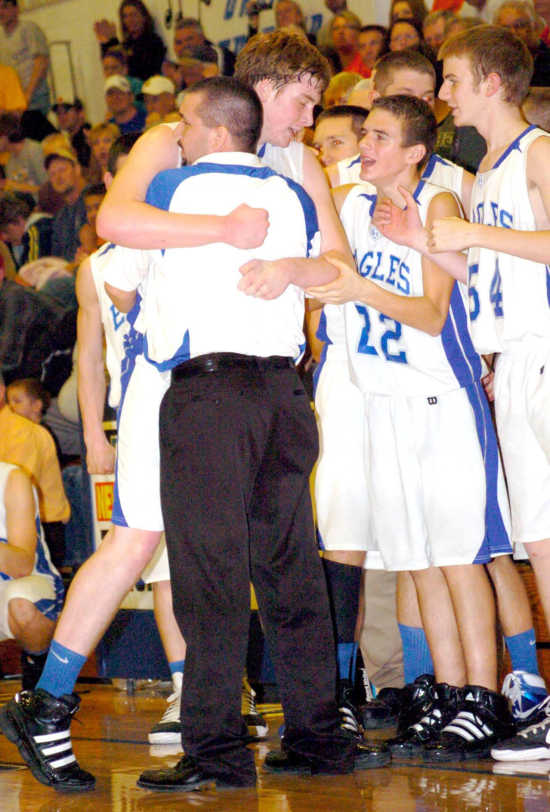 ORAN -- After last year's disappointing loss in the Class 2, District 3 Tournament semifinals, this year's group of Oran seniors wasn't about to let their last shot at a district title slip through their fingers.

Playing on their home court for the last time in Thursday's championship game, Nathan Michelsen, Jon Morrow and Tyler Heuring, all seniors, combined for 51 points against Advance, helping propel the Eagles to a 72-55 win.

"It's was just a lot of pressure on us," Oran's Nathan Michelsen said. "Because it's a district championship on our home floor in our senior year, so it means a lot to us.

"We've had a good class and we've been wanting this since eighth grade. Now it's here and hopefully we can win some more games."

Carrying an 11-point lead into the half, Oran spent the final two quarters on the game fighting back a desperate Hornets team that continued making runs into the Eagles advantage, closing to within seven to end the third quarter.

It was Oran's ability to capitalize nearly every trip to the line in fourth, however, that played a big part in helping the Eagles push their lead back to double-digits.

Shooting 93 percent from the line on the night, the Eagles had 18 free throw attempts in the fourth quarter, making 17.

"We've talked about that," Oran coach Joe Shoemaker said. "We haven't shot the ball well lately in games and we've worked on it. They shoot well in practice so it's something I've been waiting for."

Scoring five straight points to start the final frame, all free throws, the Eagles were able to pull away by 13 early in the period before using an 8-0 run midway through to go up 64-46 with 3:24 to play for their biggest lead of the night.

It was a pair of 3-point plays by Morrow and Michelsen that closed out the run as both were fouled going in for a basket, each hitting the basket and ensuing free throw.

Though Advance crept back within 13 with 1:52 to play, missed opportunities on their next two possessions allowed Oran to push back ahead by the final score of 72-55 with 36.5 seconds to seal the win.

"We played great," Morrow said. "We deserve this win. When we lost to them (84-72 during the regular season) when we had Heuring gone and we missed his defense. Me and Nathan were not 100 percent that game because we were sick.

"But we knew we wanted to come in here and play our hearts out. We wanted this."

Finishing with 17 points, Morrow controlled the paint most of the game while helping the Eagles outrebound the Hornets.

"Oran outrebounded us big time," Advance coach Andrew Halford. "We were trying to get good defensive position on Morrow and that hurt us on the boards because we were fronting him.

"He was getting good rebounding position on us because we were trying to be overly protective of him."

With 14 of his points coming in the second half, Michelsen scored a game-high 22 points for the Eagles, helping him earn All-Tournament team honors along with Morrow.

"He'd been struggling a little bit," Shoemaker said of Michelson. "He takes some hits for shooting the ball, but he's a great shooter. He got a great confidence in him and I have a lot of confidence in him when he taking shots.

"He played very hard tonight on both ends of the floor."

Moving on to sectionals, Oran will now play at Park Hills Central on Wednesday at 6 p.m. with their opponent still to be determined.

After the game, tournament officials announced the selection of the All-Tournament Team. Including on the list was Oran's Morrow and Michelsen, Chaffee's Michael Rutherford and Alex Crowe from Chaffee, and Advance's Grant Gray and Darren VanGennip. The rest of the team was Calen Buerck of Meadow Heights, Jared Hathcoat of Southern and both Cody Pollard and Blake Kelly of Lesterville.