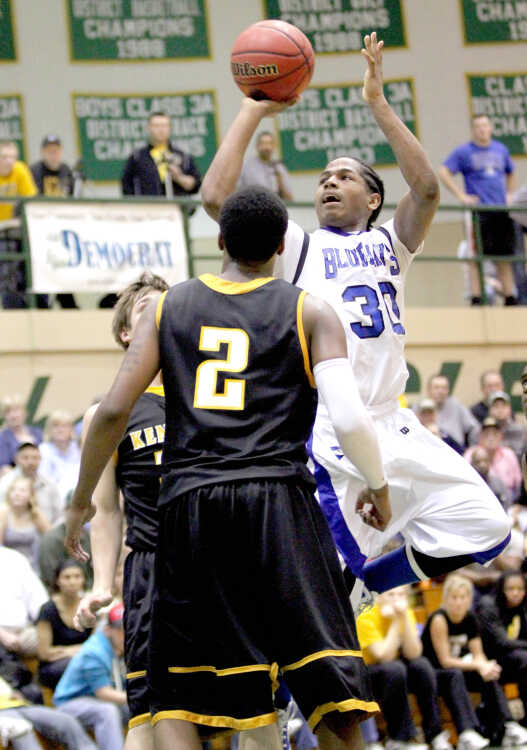 Charleston's Greg Tucker goes up for a shot against Kennett in the Class 3, District 1 championship game last week. Tucker suffered a toe injury in Wednesday's sectional contest but coaches hope he will be ready for Saturday's quarterfinal game. (Photo by David Jenkins, Staff)

POPLAR BLUFF -- After surviving a fourth quarter scare Wednesday to beat Ava, 70-68, in sectionals, Charleston's road to the MSHSSA Class 3 Show-Me Showdown comes down to this Saturday when the Bluejays take on Bayless in the tournament quarterfinal.

"We did a little scouting on them and I think we're going to be faced with another pretty good team," Charleston (23-5) head coach Danny Farmer said. "But I think it's a winnable game if we go out and play our game."

Led by freshman guard Edin Mehmedovic's 29 points, the Broncos (23-6) overcame a three-point deficit entering the fourth quarter against Saxony Lutheran to win 63-50 and advance to their quarterfinal matchup against the Bluejays.

"I think if we're on they may have a hard time beating us."

A big key in Charleston's success will likely depend on the health of their leading scorer, Gregory Tucker, who suffered a injury to his big toe late in third quarter Wednesday, leaving the game, but returning in the final two minutes of the fourth. Despite missing nearly a quarter, Tucker finished the game with 25 points.

"If we played today he would be kind of suspect, but I think by Saturday he'll be able to go," said Farmer. "It's real sore. He's going through some therapy right now and he took it easy today during practice.

"I hope he's at full strength by Saturday."

Tip off for the Saturday's contest will be at 1 p.m. at the Poplar Bluff High School gymnasium.