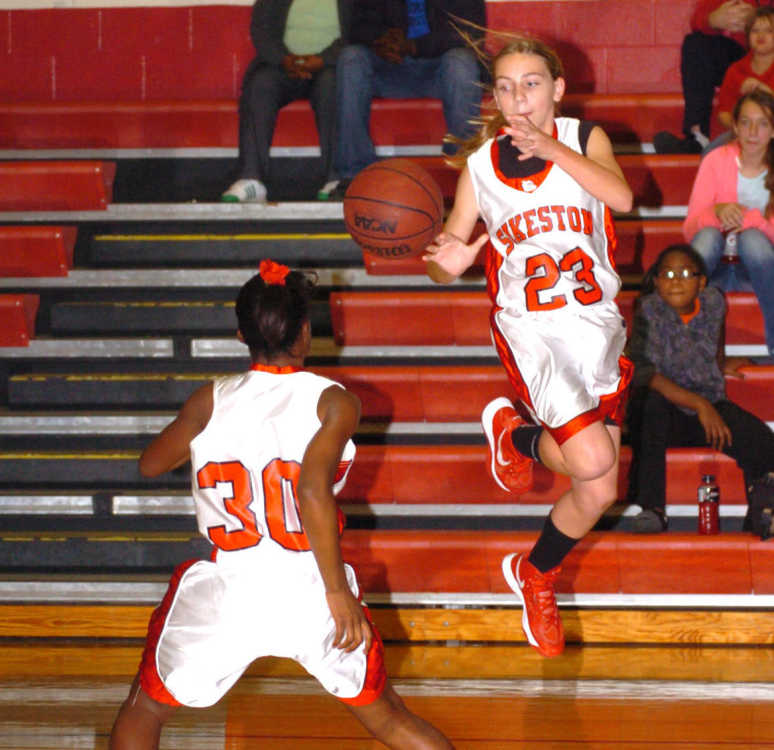 Sikeston eighth grader Marissa Jones (23) saves a ball from going out of bounds before passing to teammate Omunique Fields (30) during the Lady Bulldogs' game against Cape Central on Thursday at the Sikeston Junior High School. (Photo by Brent Shipman, Staff)

SIKESTON -- The Sikeston Lady Bulldogs' eighth grade basketball team continued their stellar start to the season on Thursday when they grabbed an early lead on visiting Cape Central and held on for a 57-35 win.

"They played hard," Sikeston head coach Keyth Blissett said of his team. "The girls did a lot of things like making layups and free throws and understanding where we're suppose to be on defense.

"That makes a big difference because Cape Central has a heck of an athlete in (Tyesha Mitchell) and they have a couple girls that complement her as well. Understanding where we need to be on defense and denying and not giving them good looks at anything (was key for us)."

After coming out of the first quarter with a slim 3-point lead, the Lady Bulldogs were able to separate themselves from Cape Central in the second frame when they outscored the Lady Tigers 14-8.

At one point late in the quarter, Sikeston was able to pull out a 12-point lead before a small Cape Central run closed the gap to 29-19 at the break.

Whatever momentum the Lady Tiger's had taken into the locker room, however, was quickly taken away to start the second half as Sikeston came out and started to add to their lead once again.

Aided by Larysa McClellon's six points in the third quarter, the Lady Bulldogs were able to outscore the Lady Tigers 16-11 in the frame to take a comfortable 44-30 lead in to the fourth.

Sikeston limited the Lady Tigers to only five points in the final frame while adding 13 to their cause to seal the win.

One of the biggest differences between a strong first quarter by Cape Central and the rest of the game, Blissett said, was a switch in his team's defense.

"We came out of a man to man after the timeout and went back to a 1-2-2," Blissett said. "We extended it out to more of a three-quarter defense and put pressure on the first pass and if they tried to dribble to the side we tried to trap them in the corner."

McClellon led the Lady Bulldogs' effort with 24 points on the night, including an eight point fourth quarter. Madeline Witt added nine points to her team's cause while Zayteanna Williams and Alexis Boyd each finished the game with six points.

"The thing is with most of these girls, anybody could have a big night," Blissett said. "I always tell them I'd rather be consistent than hot any day when we can play 10 girls deep like we do this year.

"If I have 10 girls that are consistent it's hard to play against that, because most teams don't go that deep."

The win improved the Lady Bulldogs to 8-1 on the season.

Earlier in the night, Sikeston's seventh-grade team was also able to come away with a big win, defeating Cape Central's seventh grade squad, 48-16.

The Lady Bulldogs were able to set the tone early holding the Lady Tigers to only a pair of free throws in the first quarter in a 14-2 run.

Another 14 points in the second quarter put Sikeston up 28-8 at the half with the Lady Bulldogs outscoring Cape Central 20-8 in the second half to close out the win.

Leading Sikeston's effort was Gloria Bennett with a game-high 18 points, who had eight points in the second quarter alone to help her team push their record to 5-3 on the season.

Next up, Sikeston will host Jackson on Monday with play starting at 4 p.m.