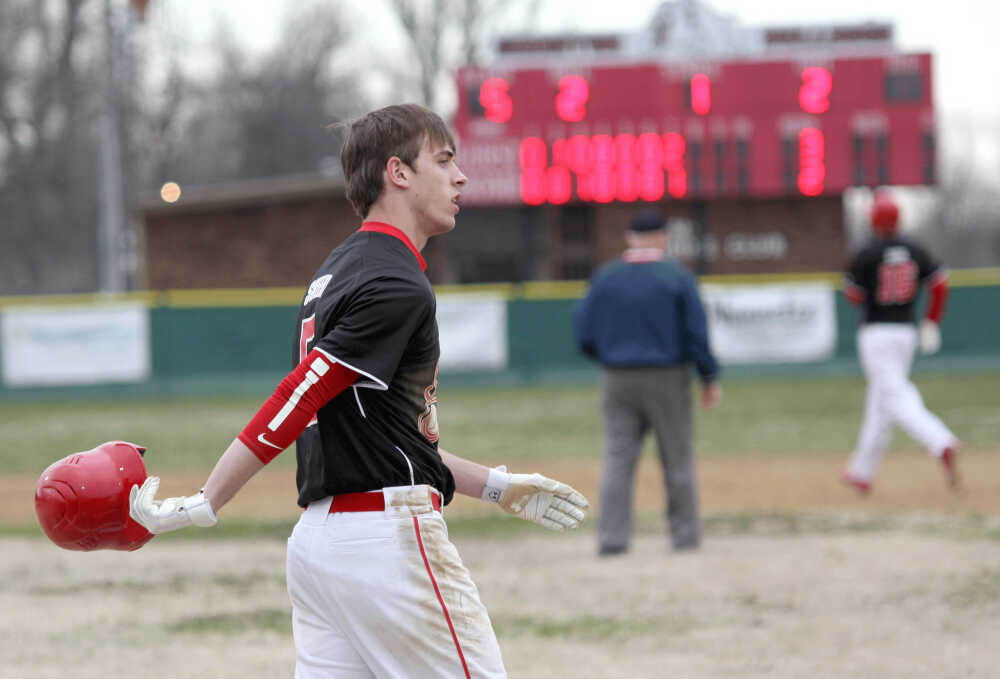 A dejected Cord Sheehy takes his helmet off and makes the turn for Sikeston's dugout after watching his fly ball go for the final out of their 3-2 loss to Poplar Bluff Tuesday at VFW Memorial Stadium. Chris Pobst, Staff

SIKESTON -- They made a push late, but a close game went the opposite way of the Sikeston Bulldogs Tuesday.

Poplar Bluff pushed two runs across in the top of the seventh which led to a 3-2 Mule win at VFW Memorial Stadium.

"The difference between a good team and a great team is how you handle adversity," Sikeston head coach Alan Scheeter said. "Today, we fought back. We had the game-winning run in scoring position. I was proud of the way we battled in the seventh inning. We didn't just roll over and accept the 3-1 defeat. We just didn't quite get it done."

Sikeston is 3-2 on the young season with each loss being a 3-2 decision. Each of their three wins are shutouts.

"I think I heard one of my seniors say that this is the first time he's beaten Sikeston in his career," Poplar Bluff head coach Stan Bullington said. "This is a nice win for us."

The Bulldogs' downward trend began in the top of the seventh.

Poplar Bluff, who is undefeated on the year, began the inning with a rare occurrence from Sikeston starting pitcher Trey Tigart. Tigart, uncharacteristically, hit Mule batter Alex Lewis during the first pitch of the at-bat. After a fly ball out, Tigart walked Brandon Stuckenschneider putting runners on first and second. During another fly ball out to centerfield, Lewis tagged up from second and took third. Stuckenschneider eventually took second on defensive indifference.

With two outs and runners on second and third, Jeffrey Rowland smacked a low-liner towards Sikeston shortstop Cord Sheehy which scooted away from the senior into left field.

Both Lewis and Stuckenschneider each scored on the play giving the Mules a 3-1 lead.

"(Rowland) had a great at-bat there," Bullington said of the eventual game-winning hit. "He was able to get the bat on the ball and get the hit. We preach approach over and over again. That was just a huge opportunity with two runners on."

Tigart was able to get out of the top of the seventh after a single and groundout.

Sikeston did all they could to muster a tie in their half of the seventh.

Leading off the inning with an RBI, Patrick Smith eventually came around to score following a single off the bat of Gavin O'Brien.

"There wasn't too many innings where either team didn't have runners in scoring position," Bullington said. "It was a little tighter in the seventh inning.

After a walk to Colton Black, Sikeston stood with the bases loaded and two outs with Sheehy at the plate. Sheehy took a 2-1 delivery from Stuckenschneider, who replaced Poplar Bluff starter Wesley Pyles in the fifth inning, into centerfield but his fly ball went directly towards Poplar Bluff's centerfielder to end the game.

"If Cord make contact just a tiny bit higher on that ball, who knows what happens there," Sheeter said. "He got a good pitch to hit and he did. It's a game of inches sometimes.

Before the seventh inning, both teams had chances to break the 1-1 tie but runs were hard to come by with Tigart on the mound for Sikeston and the combined effort of Pyles and Stuckenschneider for Poplar Bluff.

"I think we were looking at two of the better pitchers around," Bullington said. "Pyles, he was a little shaky really. He had a bit of trouble finding the zone at times. Tigart's always tough. We've seen him before and we know he's a quality pitcher. We're excited to eek out a few runs against him."

Tigart, who is considered the ace of Sikeston's pitching staff, has both of Sikeston's losses pinned to his stats so far. The senior pitched all seven innings for the Bulldogs giving up all three runs on eight hits and three walks. He also struck out three.

"Trey battles. He's a competitor," Scheeter said. "He got himself out of jams. A lot of the time he allows the hitters to get themselves out. He threw well enough to win.

"It hurts him to lose. He's got our only two losses, but I think he'll battle back and be fine. If nothing else, it will make him an even better pitcher."

Stuckenschneider picked up the win after taking over in the fifth inning. He allowed one run on three hits and two walks. Stuckenschneider entered the game after Pyles put the first three batters he saw on base.

"He's a quality pitcher," Bullington said about his sophomore hurler. "We had a lot of confidence in him to finish out that game. I'm not sure he had it in himself at times, but he got it done."

The Mules (6-0) struck first in the second inning when Lewis singled in Drew Dowd from third. Sikeston answered in the third inning when Josh Hampton scored from second base on a ball off the bat of Harper which Poplar Bluff shortstop Lucas Tibbs couldn't handle.

Sikeston will be back in action Thursday when they travel to Farmington at 4 p.m.