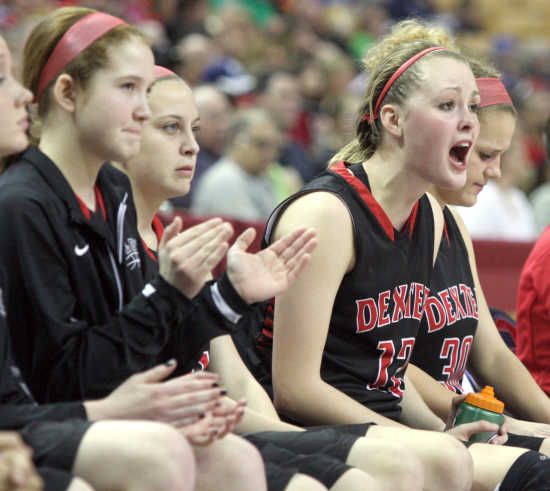 Dexter's Alison Jarrell reacts to a play Friday during a Class 4 semifinal at Mizzou Arena in Columbia. (Chris Pobst Photo)

COLUMBIA -- They didn't have much time to savor their first state tournament victory in program history.

Thoughts of how the Dexter Lady Bearcats were to topple mighty Incarnate Word were conveyed nearly minutes after beating Benton 54-21 Friday during a Class 4 semifinal at Mizzou Arena in Columbia.

Dexter will pay in its first championship game in program history Saturday at 6:20 p.m.

"It's great getting to this game but we're not satisfied," Allen said. "Whoever the winner of this game is whether its Incarnate Word or Marshfield, which odds are it probably will be Incarnate Word, but we're looking forward to it."

Incarnate Word hadn't even tipped against Marshfield during the other semifinal when Allen was hit with questions about their championship matchup with the defending Class 4 champions.

"We'll definitely try to put a game plan together and hopefully we can execute it," Allen said about playing Incarnate, who at one time was ranked the top high school girls team in the nation. "We know exactly what they're going to try and do to us. If we can execute our gameplan I think we'll have a better outcome than we did last year."

Last year was Dexter's first-ever meeting with Incarnate Word during the Class 4 semifinals. The Lady Bearcats were dismantled 66-25 and went on to lose their third-place game too. 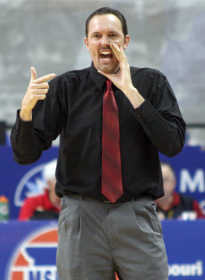 "Last year we were really nervous coming into that game," Dexter senior Paige Patterson said. "Everybody talked big about them. Now that we've got here and we know what we can do we're not as nervous as last year."

"Last year we were just in awe of them," he said. "This year we know we can play with them. We'll definitely look at some film tonight and get prepared for them. We have a short time to prepare for them, but we'll give them all that we can."

Incarnate Word would end up beating Marshfield in dominate 59-33 fashion later Friday afternoon led by Napheesa Collier's 24 points, nine blocks and seven rebounds. Collier is one of the top rated players in the nation gaining interest from the University of Connecticut and Notre Dame University.

Though Collier makes them go, Incarnate Word, who have lost just one game in its last 62 contests, isn't a one trick pony.

Senior point guard Nakiah Bell averaged 14.8 points and five assists a game and is expected to attend Iowa State University in the fall. Fellow senior, 6-0 Gwen Adams is their fourth leading scorer at 9.3 points per game but scored 18 and grabbed 7 rebounds against Marshfield. The Red Knights will be without their third leading scorer in McKenna Treece, who suffered a stress fracture in her right foot in February.

"It's hard to go up against a team like that but anything can happen," Allen said. "Knowing that we're not going to be as nervous or scared I feel like we have a better chance of playing with them. Hopefully we can stay close and pull one out at the end."