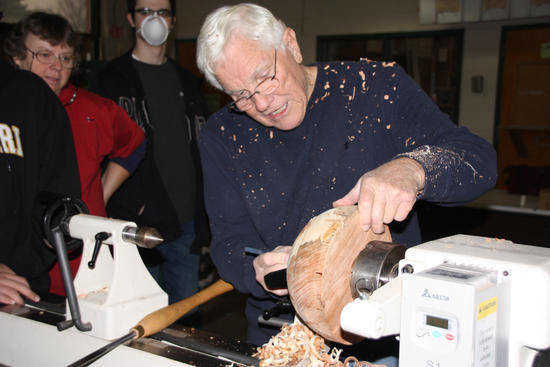 Jim Adkins of Dexter demonstrates securing an unfinished cherry wood bowl onto a lathe that was donated by several area woodworkers for use in the Industrial Arts classroom at DHS. The lathe is put to use during the monthly meeting of a recently established club for woodworkers. Also pictured is a wooden Christmas ornament, handmade by woodcrafter, Bruce Plummer, also of Dexter. A third photo shows a finished bowl and lid, made by Bob Keathley of Bernie. Also pictured are pens made from raw wood by Candy Williams, the former postmaster in Broseley, Mo., and a proficient woodworker in her spare time. A gallery of these and additional photos from a recent meeting of the Crowley Ridge Area Turners, may be found in Photo Galleries at www.dailystatesman.com or by scanning the QR code herein. Photo by Noreen Hyslop

DEXTER - There is a new forum in town for woodworking enthusiasts, and it's complete with not only some of the best equipment around, but also with some of the most accomplished and noted woodworkers in the Bootheel -- perhaps in the state.

Dexter's Industrial Arts instructor Marti Pulliam has been instrumental in forming the woodworking club, but not without the influence and assistance of some local experts in the field who saw the need to establish a setting where the experienced and the inexperienced could join forces for a common good.

"It's an excellent group," noted Dexter Supt. Dr. Tom Sharp as he witnessed the group meeting on Saturday, Dec. 20. "This will be a very positive thing for the community."

To boost the formation of the Crowley Ridge Wood, several local woodworking and woodturning enthusiasts -- Jim Adkins, Bob Keathley, Bruce Plummer, Jim Bliss, Jerry Moore and Don Robinson -- combined their own resources to purchase a state-of-the-art lathe that has been placed in the high school shop for the club's use. The lathe offers greater technology than has ever been available at the high school.

At the Dec. 20 session of the Crowley Ridge Area Turners, the lathe was put to good use as first the experts, then the students, had a shot at transforming a chunk of seasoned wood into what would eventually become a useful wooden bowl.

With wood chips and sawdust flying, a few of the more accomplished "turners" first took to the lathe, then provided some guidance for several of the "newbies" who were anxious for some hands-on applications.

Jim Bliss, a well known woodworker from Kennett, said, "It's about finesse, not muscle," as he demonstrated some of the proper techniques on the lathe.

According to Plummer, a skilled Dexter carver, the class will offer instructions not only in the technique of turning, but also carving, cabinet building and other useful, lifetime skills. There is something for everyone, he noted.

"Some people have years and years of experience," explains Plummer, "and then we have some high school students, which is pretty exciting."

Keathley and Adkins worked over the past year with the shop instructor, Pulliam, advising her in bringing the somewhat antiquated Industrial Trades shop up to date. The result is a well-planned and user-friendly shop, with plenty of workspace.

"In the process, they taught me some of their tricks of the trade," Pulliam says, who admittedly is still learning from the experts at hand.

Those skills are being handed down not only to her students, but to some of the club members as they "get their feet wet" in the woodworking field.

Club members are innovative in developing methods by which to support their program. For a one dollar donation at the Dec. 20 meeting, members had the option to donate one dollar toward the raffle of several "chunks" of wood that various attendees had brought with them to the meeting.

"They're items you might find in a typical burn pile," explained Pulliam.

The lucky raffle winner took home pieces of cedar, poplar, cherry, ash, oak, and maple with which to work their magic.

Organizers hope to see more and more attend the monthly sessions at the Dexter High School shop. The next club meeting will take place on Saturday, Jan. 17, beginning at 9 a.m.