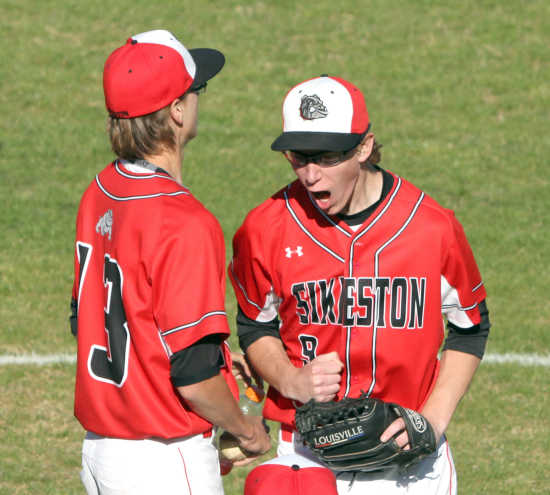 SIKESTON -- Before Friday's first round game against Cape Central, Trent Sidwell was told he'd pitch the game of his life. Sidwell's fortune teller was his coach, Alan Scheeter, whose prediction was spot on.

Sidwell pitched a complete game, 3-1 win over the Tigers during the opening round of the SEMO Conference Tournament at VFW Memorial Stadium advancing them to the semifinals for the third time in three years.

"I told him that he's going to throw the game of his life. He did too," said Scheeter. "He did not disappoint and did everything right. He battled out of jams and was as tough as he's probably every been."

Sidwell struck out nine, walked four and gave up five hits while working out of two serious predicaments that could have turned the game around. His work on the mound was especially sweetened knowing that it set up Sikeston's pitching rotation for the semifinal round against one of its rivals.

Sikeston, the tournament's fourth seed, will play top-seeded Notre Dame Saturday at 2 p.m., for a chance to move on to the tournament finals with Jacob Clark on the mound. Sikeston lost to Notre Dame 9-1 just three days ago. 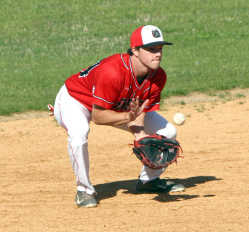 "I definitely felt that," Sidwell said. "I had my team behind me and they helped me a lot. I couldn't have done it without them."

While Sidwell played his role, it was Blake Wolferding who provided the Bulldogs the hit that eluded Sikeston through four innings.

Wolferding took a two-strike curveball up the middle that scored both Cody Rodgers and Sam Cox to give Sikeston a 2-1 lead in the fifth. Before that, Sikeston stranded five runners in the first two innings.

"I was looking curveball and he hung one a little bit," Wolferding said. "We've been hitting the ball in those situations but they've been right at people. We keep telling ourselves if we keep hitting the ball hard it's going to find a hole. We keep doing that, we'll win these types of games."

Wolferding, who went 2 for 2 at the plate, came to the plate with runner's on first and third with one out after singles from Rodgers and Cox.

"Wolf came through and got the big clutch hit," Scheeter said. "I'll take him in that position every single time."

Both teams left eight runners on base. Fifth-seeded Cape Central stranded runners on first and second in the fourth and the bases loaded in the fifth.

"We just left way too many people on," Cape Central had coach Tatum Kitchen said. "We had our opportunities. I thought the Sidwell kid threw really well. I thought once we got through the lineup once we would hit him a lot better, but he did a good job battling. He got out of jams and we didn't hit the ball when we needed to."

Sidwell's first jam of the day resulted in Cape Central's lone run in the fourth. It started with a walk to Chase Hagerty who was eventually pushed across after a single from Ryan Tegal. After an infield fly for the first out of the inning, Sidwell coaxed a groundball which was scooped up by Rodgers at second and turned into a double play to end the inning.

His second, and most worrisome, struggle came the very next inning when Cape Central loaded the bases with one out. Sidwell struck out both Hagerty and Hayden Lynn, Cape Central's No. 3 and 4 hitters, to preserve the 1-run deficit.

"It was tremendous pressure there," said Sidwell. "But, Blake came out to the mound and talked me through it. He called a really good game when we got into those situations and we worked our way through it. I was just trying to throw strikes. I struggled with that at times. But when I got into some jams I dug deep and was able to get the strikes that I needed."

Riding the momentum of Sidwell's strikeouts, Sikeston retaliated with its two runs in the bottom of the fifth on Wolferding's single.

"Trent pitched a heck of a game. Couldn't have pitched a better game," Wolferding said. "Credit goes all to him. He's the reason we won today. He hit his spots all day long and his curveball stayed down. He had big strikeouts and got out of a lot of innings with limited damage. He was just sharp all the way around today."

Sikeston (11-8) was able to tag Cape Central's Josh Morse for two earned runs -- which is something that hasn't been easy to do of late. Morse came into Friday's contest without giving up an earned run in 32-straight innings. He finished with four strikeouts, two walks and allowed 10 hits in six innings.

Morse worked his way out of a bases loaded jam in the first inning, getting a strikeout to end the second inning with runners in scoring position and limited the damage in both the fifth and sixth innings that could have gotten worse.

"He competes very well," Kitchen said about Morse. "He's not a lights out, elite stuff type of pitcher but he can locate. The best thing about him is his competitive ability on the mound. He kept us in the game by making pitches."

Cape Central (9-11) will take on Kennett in the consolation semifinals at 10 a.m. Saturday at Cape Central High School. Notre Dame defeated No. 8 Kennett 8-3, No. 2 Poplar Bluff defeated No. 7 New Madrid County Central 13-1 and third-seeded Jackson took down No. 6 Dexter 9-3.

It's the second-straight year Sikeston and Notre Dame will meet in the conference semifinals.

"I think we've got a good chance especially with Jacob on the mound," Wolferding said. "He's got good command, good curveball and if we can carry the bats over from this game we should have as good a shot as anybody."