"The lineup is far from being set in stone but, I'm really excited to get to work with the 23 guys we have coming out this year. We've had a small group of guys participate in lots of open gyms and have put a lot of work in," said Portageville head baseball coach Zach McDaniel.

"We lost four starters from last year, but I'm confident we can fill those spots with some returning players and possibly some newer faces. We feel really good about our schedule. We have a mix of out of area teams and five SEMO conference teams including Jackson and Cape Central."

"Our kids love to compete with higher competition and so thats what we'll try to do throughout the season. The JV should rack up some valuable innings as well with 14 scheduled contests." 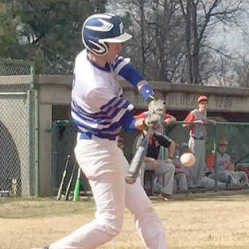 Senior Tyler Daugherty makes a hit last Saturday in their win against Puxico. The game was apart of a double header hosted in Charleston. Portageville defeated Puxico, 11-4.

"The leadership is very solid in our upperclassmen. Senior Tyler Daugherty went 7-1 on the mound last year and will eat up most of our innings this year. He's been working his tail off all off-season by going to open gyms between basketball practices and finding time to attend camps and showcases. He's seeing these benefits and its nice to see his confidence is growing," said McDaniel.

"Senior, Jon Garrett Kellams will be an every day starting catcher for the fourth straight year. He's been a first team all conference player each year as well and has led the conference in home-runs in 2015. Sometimes we take for granted how nice it is to have him behind the plate-some coaches stress having to call a lot of pitches throughout a game, but with JG, I don't have to call any," continued McDaniel.

Coach McDaniel has been the head baseball coach for two years now. He has helped to lead the Bulldogs to a 18-9 season record and a 6-1 conference record.

The Bulldogs played in a double header last Saturday in Charleston. The first game was with Puxico with Portageville taking the win, 11-4 and, loosing the second game to Charleston 11-12.