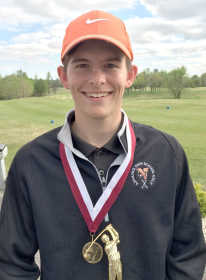 The Advance senior returned Friday to Ozark Ridge Golf Course and was the only player to break par, earning medalist honors.

"I played here since I was 8 years old," said Whitson, who finished at 2-under-par 68 for a three-shot victory.

So did Ty LeGrand and the Jackson Indians.

LeGrand placed second at 1-over 71 and was one of three Indians to break 80 to take the team title by six shots. Case Englehart and Hunter Asher each shot 79, tying for 11th, while Tanner Walton was a shot back tied for 14th and Landry Moore was 17th with a non-scoring 81.

Jackson's 309 beat the host Mules, who had not played or practiced at Ozark Ridge this spring.

"I don't think I would have done the same as here," said Whitson, who shot 12-over 83 to tie for 22nd at Westwood Hills in the Invitational last year.

His round Friday started with consecutive pars before consecutive birdies beginning on the par-5 eighth hole, his third. Another birdie followed on the par-3 ninth when his tee shot landed within a foot of the hole.

"It may have hit the pin, it may have lipped out, I don't know," Whitson said.

He got to 3-under after missing an eagle putt on the par-5 12th for a tap-in birdie.

Dexter's Ethan Stephens later sank his eagle putt on 12 after sticking a 9-iron from 150 yards within 15 feet.

"I hadn't been putting very well but it went in," said Stephens, who got back to even par with the putt.

A bogey on the next hole and a triple-bogey three holes later when he hit into the woods knocked the Dexter senior over par but he carded his second birdie on the final hole and tied for fourth at 3-over 73.

LeGrand got to 1-under with a two-putt birdie on No. 12 but he also followed with a bogey and a double bogey. His tee shot on the par-3 17th landed within 10 feet leading to a birdie while he also carded birdies on the par-4 seventh and par-3 ninth holes.

"I struggled putting a little bit at first then I righted the ship a little," LeGrand said.

Whitson sank a birdie putt on No. 13, which tied for the toughest hole in the round. A pitching wedge from 117 yards landed within 5 feet of the cup leading to one of three birdies from the field.

"That's a hole you need to hit your tee shot somewhere in play," Whitson said. "I kind of let up on my driver."

His first bogey of the round came on the next hole, the downhill par-4 14th, when he, "pulled a little Speith."

"I chunked it and ended up short of the sand trap," Whitson added.

After four straight pars, Whitson missed the No. 1 fairway left leading to a bogey while another followed at the par-3 third hole when he missed a 5-foot putt to get up and down. He sank a birdie putt on the par-4 fourth and finished with a par.

"I never really intended to birdie (No.) 4," Whitson said. "I was think par-par. It turned out pretty good."

Playing in the same group as Whitson, Central's Kobe Franklin placed third at 2-over.

Franklin opened with the first of his four birdies and had nine pars but played the final seven holes 4-over.

Notre Dame's Jonathan Bell tied for fourth at 3-over 73. He was 1-under after eight holes and after a birdie on No. 12 but also ran into trouble on the next hole.

Bloomfield's Andrew Northern was a stroke back for sixth while teammate Peyton Bell's round featured an eagle on the par-5 second hole, his 15th of the day.

"They had their kids step up," Mules coach Billy Pyland said of Jackson.

The teams will tee up again Monday at Jackson's tournament and again for the conference championship on April 25 in Sikeston.