Portageville gets back on track with 45-27 win over Chaffee 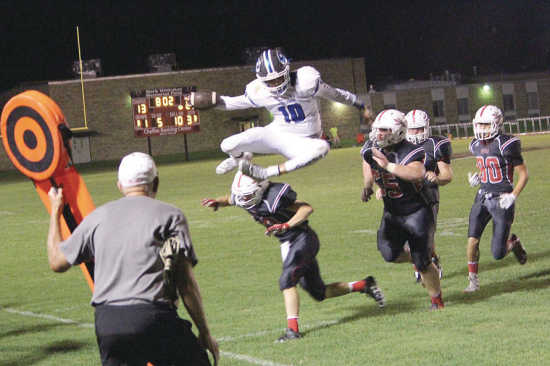 Portageville's No. 10, Ian Torrey, leaps over a Chaffee defender on his way to a first down. Portageville defeated Chaffee, 45-27, is last Friday's Week 2 match up. The bulldogs will be at home this Friday splashing against the Malden Greenwave.

CHAFFEE -- Shaking off a rough start to the season against Caruthersville, the Portageville Bulldogs seemed to find their stride on both sides of the ball Friday against host Chaffee.

A couple touchdowns late in the second quarter swung momentum the Bulldogs' way with Portageville scoring 38-unanswered points during one stretch en rout to a 45-27 win.

"We made strides," Portageville head coach Jeff Bullock said. "We probably went too hard Monday and Tuesday so Wednesday we had to rest them because the heat hit us. Overall, my older kids did a great job and some young guys got a chance to play, which we're always grateful for.

"In the end the scores going to reflect it a little closer than it was, but I have the upmost respect for Coach Vickery and Chaffee."

A special teams play and a late defensive stand in the first half broke up a 13-13 tie and had the Bulldogs sitting comfortably ahead, 26-13, going into the locker room.

Lamar Alexander returned a punt 80 yards for a touchdown with 5:47 left in the second quarter, making it 19-13.

With less than a minute to play before the half, Portageville (1-1) burned two timeouts to keep Chaffee (1-1) from running out the clock while trapped deep in their own territory.

Forced to punt from their nine-yard line, the Red Devils saw another solid Alexander return leave the Bulldogs 11 yards from the end zone. A false start moved them back to the 16, followed by quarterback Ian Torrey getting tackled for no gain on second down.

Torrey spiked the ball to stop the clock, setting up 4th down from the 16 with eight seconds remaining. Torrey moved to his old position, wideout, for the next play with sophomore Conner Barham taking over at quarterback.

Like so many times last season, Torrey worked his way open in the end zone and where Barham lofted him a pass that left their team up 26-13 at the half.

"A couple of things go really bad wrong (to start the drive)," Bullock said. "But then we line Ian up out wide. We know they know what's going to go on. Conner and Ian both did a great job. They were suppose to run a little post corner and throw a fade to the end zone.

"Ian sees the coverage and he Conner just kind of communicate. They stick with the post so they really made me look good, which isn't an easy thing to do."

After the break the Bulldogs put together a strong quarter defensively and added another three scores to effectively put the game out of reach.

Chaffee was held to just 50 yards in the third quarter and their passing game was grounded with quarterback Landon Tenkhoff going 0 for 7 during that stretch.

Torrey capped Portageville's night offensively when he finished off a 13-yard run by diving for the right pylon to give his team its sixth consecutive score and making it 45-13 entering the fourth quarter.

A pair of Chaffee touchdowns in the final minute of the game made up the final.

"They were blitzing with their linebackers and we didn't pick it up like we needed to pick it up," Chaffee coach Charlie Vickery said. "The first half I thought we were moving the ball pretty well against them. I though the main thing in the second half was come out and get a score and you're right back in it. We drove down, but didn't get it in there."

Torrey threw all but one pass for the team, going 12 of 22 for 177 yards and two scores while catching another touchdown. He carried the ball 16 times for 114 yards for a 7.1 yard-per-carry average.

Alexander added to his big night on special teams with eight rushes for 54 yards.

For the Red Devils, Tenkhoff had 91 yards on 23 carries and Uzziah Beggs rushed 13 times for 90 yards. Tenkhoff was 10 of 27 through the air for 110 yards and three touchdowns. 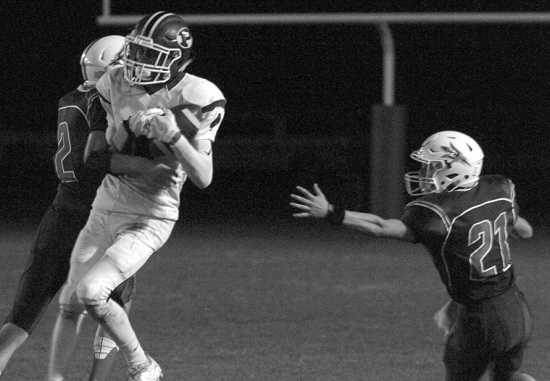