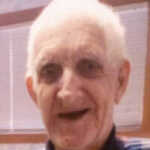 Born Sept. 28, 1934, at Center Ridge, Arkansas, to the late Newton Pearson and Stella Pearl Shipp Pearson, he grew up in Center Ridge and moved to Missouri as a young man. He first worked for Reiss Dairy and then as a truck driver for Malone and Hyde until he retired in 1983. He was a member of the Church of God at Grant City north of Sikeston. He was thoughtful, caring and helpful to others, in and outside his family. He was an avid fisherman.

In addition to his wife and parents, he was preceded in death by his son, Carl R. “Ricky” Pearson; grandson, D.J. Pearson Jr; his brother, Charles Doyne Pearson; and his sisters, Wanda Rofkahr and Katheryn Bailey.

Private burial will be at Garden of Memories Cemetery at Sikeston under the direction of the McMike Funeral Home of Sikeston.

Online condolences may be shared at www.mcmiklefuneralhome.com.