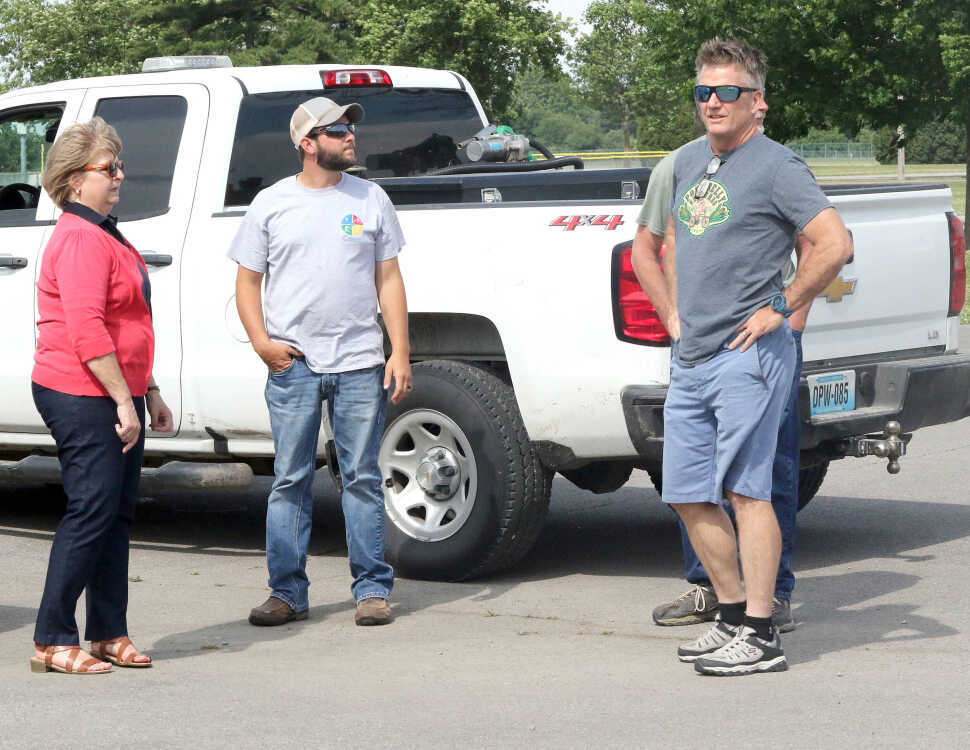 Pete Phillips of Pork Belly Ventures (far right) speaks with Kathy Medley, director of the Sikeston Convention and Visitors Bureau and Matt Holifield of the Sikeston Parks and Recreation Department. Phillips was there to discuss logistics of the upcoming Big BAM ride that will stop in Sikeston on June 14. (David Jenkins/Standard Democrat)

SIKESTON — Bicyclists will be flooding into Sikeston on June 14 as part the Big BAM (Bicycle Across Missouri), a road ride through southeast Missouri.

This year marks the sixth year for the Big BAM, but the first time the ride will come through the area. The ride will gather on June 13 and travel through the countryside and small towns with overnight stops in Sikeston (June 14), Cape Girardeau (June 15), Perryville (June 16), Farmington (June 17) and concluding in Ste. Genevieve on June 18.

There are over 150 riders from 21 states that have already signed up, with more expected. Riders will be coming from as far away as California, Wyoming and South Carolina.

Organizers were at the Sikeston Recreation Complex Thursday afternoon to double check logistics for the rider’s stay in Sikeston.

Pete Phillips, of Pork Belly Ventures, said his group is responsible for providing things like shower trailers, tent set up and things of that nature.

“Some will bring their own tents and some of them will have us bring a tent for them,” Phillips said. “We also have a semi trailer that we’ve converted into little air conditioned rooms. People that don’t want to stay in tents can stay in one of those.”

The group will stay at the Complex, between the Lake and the Jaycee football fields.

Kathy Medley, director of the Sikeston Convention and Visitor’s Bureau, said a shuttle will be available to riders to go to restaurants in town.

“We’ll have a shuttle available to take people to Jeremiah’s downtown,” Medley said. “(Jeremiah’s) will have live music and we can shuttle people there and back.”

Named one of the Best Supported Bike Rides in the country by Outside magazine, Big BAM will traverse about 300 paved roads with fairly low traffic. The route passes by cotton and rice fields, wineries, and follows ridge roads in the Ozarks.

Big BAM organizers work with local authorities all along the route to help create a safe and fun event. Big BAM places or has ensured water and rest stations every 12 to 15 miles.

“We also encourage people along the route to set up refreshment stands if they wish and to cheer on the riders,” says Big BAM executive director Greg Wood, who is also publisher of Missouri Life magazine. “In the past, 4-H clubs, churches, or other organizations have set up fund-raising booths to sell water and snacks to cyclists.”

Big BAM is a fully supported ride, and registration fees include gear transport, camping, SAG support, water and food stops every 10 to 15 miles, bike repair services, free coffee in the morning, and shower trailers located next to the camping area.

“We work with the pros in the industry to make sure everything works like clockwork,” Wood said.

BAM encourages local cyclists to participate, too, even if they can only ride one or a few days.

“We work with each rider to make sure they have a great experience and that includes shuttling them back to their cars,” Wood said.

Phillips said many park in Ste. Genevieve on June 13 and be bused down to Poplar Bluff to start the ride the next morning.

Visit BigBamRide.com for more information and a route map.