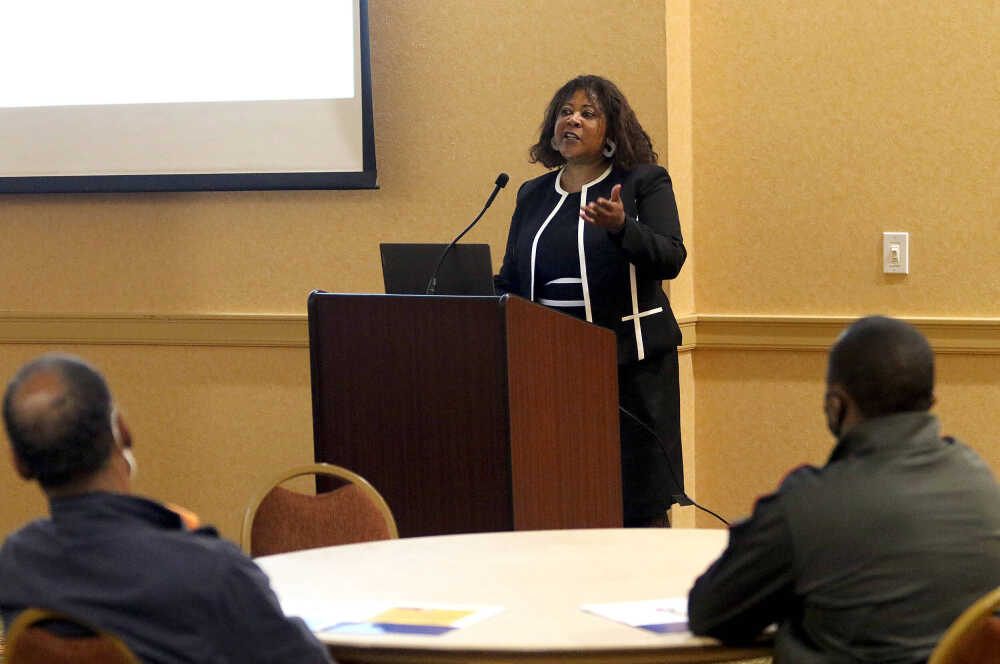 Lynne Chambers, CEO/Principal of Chambers & Associates Consulting & Professional Services, speaks on what works and doesnŐt work in re-entry at the Adult Re-entry Program held by the Missouri Bootheel Regional Consortium on Friday at the Miner Convention Center. (David Jenkins/Standard Democrat)

MINER, Mo. — All justice-involved individuals in the Missouri Bootheel deserve a second chance.

That was the theme of the Adult Re-entry Program by the Missouri Bootheel Regional Consortium held Friday at the Miner Convention Center.

The need is high as Dunklin and New Madrid Counties rank one and two in sentencing rate in Missouri counties while Mississippi County is eighth.

Mary Meyer, re-entry coordinator with the Missouri Department of Corrections in Jefferson City, Missouri, spoke on the Missouri re-entry process and Aaron Bales and Whitney Sanford of the Gibson Recovery Center in Cape Girardeau spoke about the rural community’s opiod response program.

In his 2004 State of the Union address, President George W. Bush announced the Prisoner Re-entry Initiative to help released inmates find work and make a fresh start in life after prison. Expanding on the successful Ready4Work pilot program, PRI links returning adult nonviolent offenders with faith-based and community organizations that help them find work, connect with mentors and avoid relapse into criminal activity.

PRI is yielding results for America’s ex-offenders. In the first two years of the program, more than 12,800 offenders have enrolled in the prisoner re-entry program and more than 7,900 have been placed in jobs. Only 18 percent of those enrolled in the program have been arrested again within one year — less than half the estimated national average.

The PRI is a signature program of the President’s Faith-Based and Community Initiative and is a collaborative effort between the US Department of Justice and Labor to help reduce recidivism in urban centers and other areas with the greatest need.

The MBRC Male Empowerment Now (MEN) Adult Re-entry Program provides pre/post release services to ex-offenders returning to the Missouri Bootheel nine months prior to their release date and 12 months after they are released from the Missouri Department of Corrections.

The goals of the program are to:

• Reduce the recidivism rate of ex-offenders

The program collaborates with local, state and federal community-based organizations while the MBRC will provide mentoring and case management services to 150 medium to high-risk men incarcerated at the Farmington Correctional Center and Southeast Correctional Center in the southeast Missouri region.