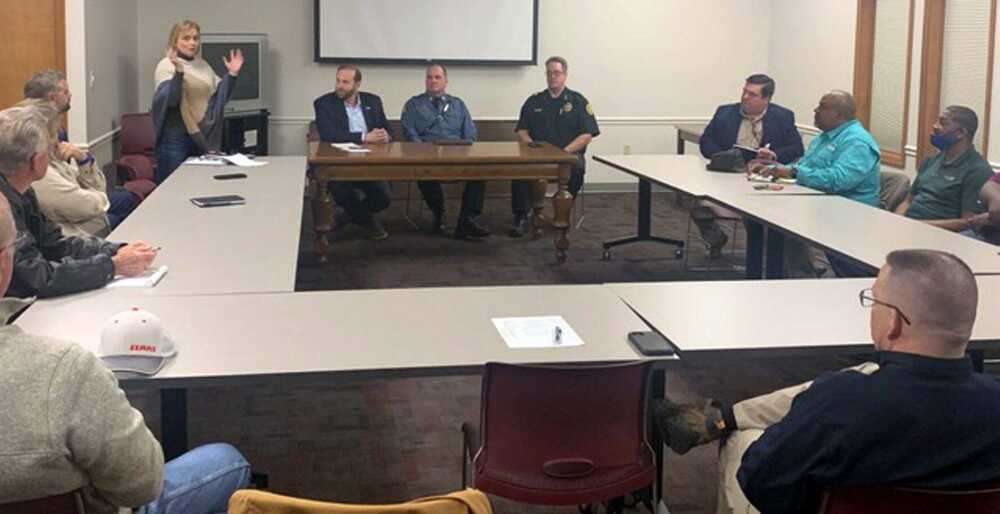 U.S. Rep. Jason Smith and officials from the Charleston and Sikeston, Missouri, area discuss recent gun violence and how to decrease them in the future, Friday at Clara Drinkwater Newnam Library in Charleston.
Beau Nations ~ Southeast Missourian

CHARLESTON, Mo. — The increase of gun violence in Mississippi County has members of the community searching for solutions.

Gun crimes how to minimize them in the future was the main topic of discussion by U.S. Rep. Jason Smith and Charleston area officials Friday at Clara Drinkwater Newnam Library.

Smith, U.S. representative for Missouri’s 8th Congressional District, called for the meeting after the recent uptick in gun violence in the county. Three weeks ago in Charleston, two gunmen opened fire during a party, leaving 14 people injured and killing 23-year-old Clintayzia Clark and 19-year-old Brianna Schumer.

Smith said he was there to listen to the members of law enforcement and city officials to figure out how gun violence in the area has reached the point it has and talk about solutions on how to decrease it in the future.

Mississippi County Sheriff Britton Ferrell discussed some of the ideas he and other members of the area have already begun to discuss implementing.

“It is a systemic regional problem, so what we’re trying to do is put together an effort for information and coordination to help curb some of these things,” Ferrell said. “Professionally, I think SAPA [Second Amendment Preservation Act] is an issue for us here at the state level. I think, more or less, it could be a cultural bias. Lawmakers in Washington, D.C., and some at the state level, we don’t feel like we have our backs.”

SAPA, which took effect in August, prohibits enforcement of some federal gun laws by local law enforcement officials, and allows police departments to be sued for violating an individual’s Second Amendment rights of gun ownership.

Members of the Charleston and Sikeston departments of public safety said getting gun violence offenders in a federal court, rather than a state level court, would help get the offenders behind bars for years rather than months. This would prevent the community and, specifically the youth of the area, from being exposed to gun violence.

“Steering committees of people from a community that have a great deal of respect can serve as ambassadors between the committee and the community,” he said. “I feel like we have to retrain people’s mindsets from not telling what happened to a mindset of, ‘What if this was your family member?’”

How to steer Mississippi County’s young people away from witnessing gun violence or being introduced to gang activity was also brought up.

“We need to start at 7, 8, 9 or 10 years old to give these children positive male role models,” Gillespie said. “We’re going to see a change in seven, eight or nine years, which is more long term, but the thing is it is going to happen because now we can get children steered in the right direction at a younger age and the older ones, we just have to get them off the streets. We have people at the table from the community, working with law enforcement, but this has to be a long-term thing. Short term, it’s not that.”

Other topics brought up included funding for body cameras for law enforcement officers in Mississippi County, security cameras and an increase in police presence in areas where criminal activity is known, such as “trap houses” in the area where drugs are sold.

Smith ended the meeting by restating his stance on maintaining police funding and the importance of prosecuting gun-violence offenders.

“If you know anything about my record, you know where I stand about funding the police and protecting law enforcement,” Smith said. “I don’t care what color of skin you are, if you are part of a crime in our congressional district, you need to be prosecuted. What came out of this meeting more than anything is relationships matter. People need to communicate.”