SIKESTON -- The Sikeston Senior High School cheerleading squad has participated in its share of competitions this year. And, on Saturday, it qualified for what will be the biggest competition so far in the 20-girl squad's cheering career.

In regional competition to qualify for Nationals, held in Wentzville, the team won not only the large varsity division, but also clinched the the grand award.

"It's given to the squad that got the highest number of points in all divisions through the whole thing," said Wanda Throop, one of the cheerleading sponsors. "The girls were thrilled about the award, and they were very thrilled that they completed the routine successfully." 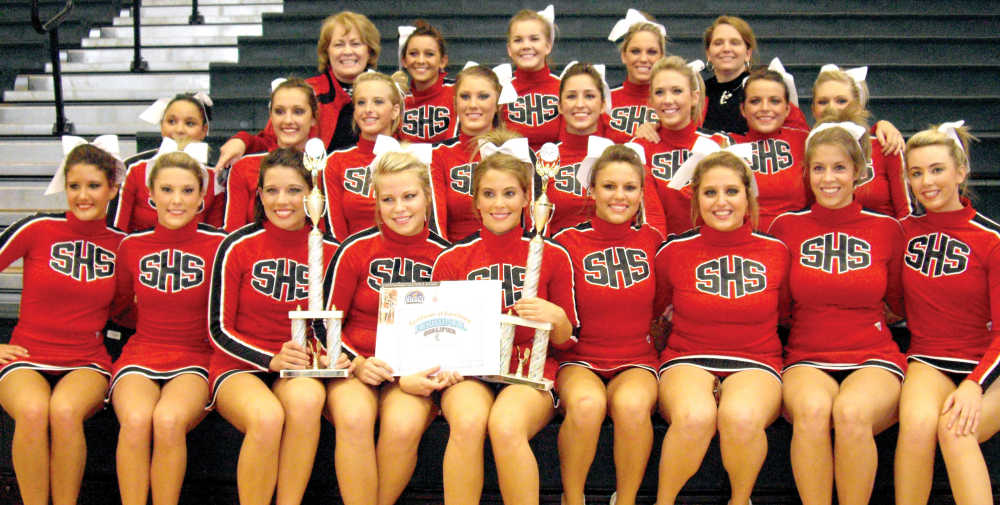 National competition is set for Feb. 7 and 8 in Orlando, Fla. It will be the squad's first appearance there in about 20 years.

Throop explained that until the state rules were changed two years ago, cheerleaders in Missouri actually weren't allowed to compete at Nationals while they were governed by the Missouri State High School Activities Association. Since then, girls on the squad have wanted to compete, but sponsors knew they just weren't ready -- until now.

"This year, we had the ability level to do it," said Throop. "We knew that we had a tremendous amount of talent."

Fellow sponsor Tricia Keefer agreed. "I really think this is the right time for our team. Our girls have really stepped up their ability."

Comments such as that were also made early in the year, when the facilitator of a camp held at the school noted the readiness of the squad to compete at a higher level.

And when the squad earned its third consecutive state title in November, parents and sponsors decided to allow them to try out for nationals.

"We thought it would be fun, and a reward for all of their hard work," said Throop.

And although the competition had different requirements which meant several alterations must be made to their routine -- and more difficulty -- cheerleaders were ready for the challenge, even though it meant numerous extra hours of practice.

"It was a lot of fun and a really good experience," said Arianne MacGillivray, head cheerleader.

"All of the practice has definitely been worth it."

MacGillivray said she and other cheerleaders went into Saturday's competition unsure of what to expect.

"It was a lot more laid-back than state," she said. "And we didn't really treat it as a competition -- we treated it more as a performance."

But she said that, with all of the other competitions and performances done throughout the year, it likely made everyone a bit less nervous.

MacGillivray said she's interested to see how her squad compares to others come February.

"I know we can hang in there with the top squads across the nation," she said. "But we're not expecting first place because this is our first year. We really just want to make it to the finals."

Throop agreed. "We don't have anything to prove, because this is our first time," she said. "So we're going to go and learn and we're going to do the very best that we can do."

Keefer said the team's performance and attitudes are what makes it worth being a coach.

"A coach wants to see the look on their faces after they've performed to the best of their ability," she said. "It makes it worth all the time and hard work."

She said the hard work and dedication of the cheerleaders must be noted. Also contributing to the success of the squad is the leadership.

"This team had nine seniors, and that's kind of an odd thing for cheerleaders to stick with it for that long," said Keefer.

In the next couple of months, the squad will continue to add changes and more difficulty to their routine. "We'll be tweaking the routine and maybe even building it up a little bit to make it even more competitive," said Throop.

There will also be fundraisers over the next couple of months to help alleviate some of the costs to send the squad to Florida.

"We really want to send the girls down there," said Throop. "We think this will be a great experience for them."

Parents are now in the process of organizing several fundraisers. MacGillivray praised the community for all the support they have given and will continue to give over the next two months.