Cape Central press too much for Charleston 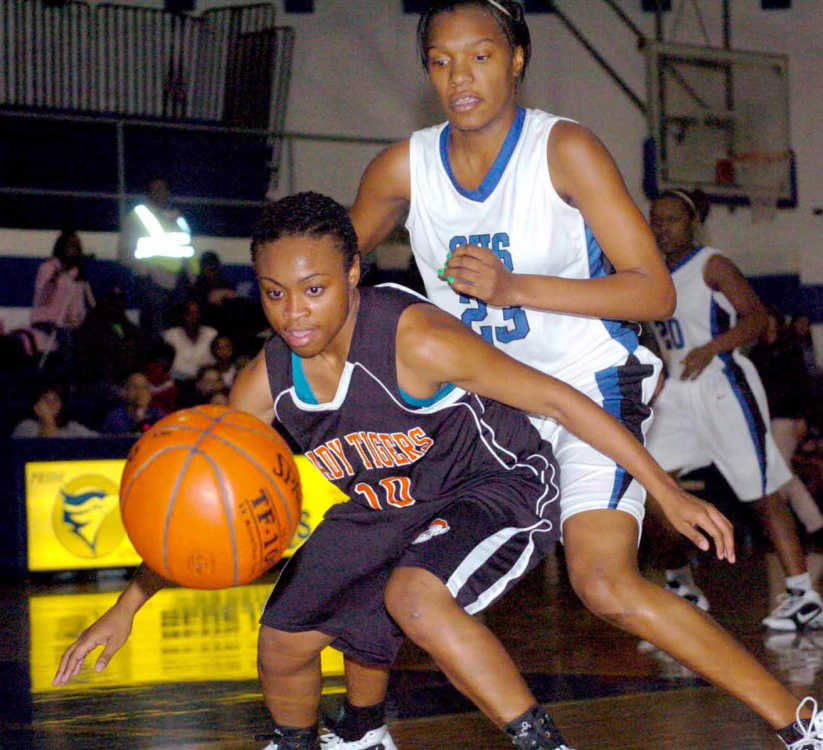 Lady Bluejays turn the ball over 41 times in game

CHARLESTON -- The Charleston Lady Bluejays are used to turnovers. They're just usually the team that causes them.

The Cape Central Lady Tigers pressured the Lady Bluejays into submission on Monday night as they caused 41 Charleston turnovers in their 66-45 win at Charleston High School.

"You can't do that," Charleston head coach Michael Minner said about the amount of turnovers. "Tonight was one of those special situations where we had to play great to win.

"They're big, they shoot it well and they kind of wore us down, which is kind of different for us."

The Lady Tigers' full-court press caused tremendous havoc against the usually sure-handed Charleston (11-4). Cape Central's sticky fingers picked off 30 steals throughout the game and was the prime reason they were able to regain and sustain a lead in the second half.

Sensing the high intensity pressure being applied to them, the Lady Bluejays had to slow down the pace and attempt to pass through Cape Central's stingy defense. But, slowing down a Charleston team that likes to use it's speed to get up and down the floor was not successful.

"We preach playing fast but tonight they pressed us and we just needed to slow down," Minner said. "Too many times we dribbled into corner traps and didn't know what to do with the basketball. We had people open but we threw balls up for grabs."

Despite the abnormal total of turnovers, the Lady Bluejays crawled back from a seven-point, first quarter deficit in the second period.

A 10-2 run gave Charleston a one-point lead with 1:52 left in the first half. An offensive rebound by Jasmine Spence made it a 21-20 game in favor of the Lady Bluejays. Kasuela Cooper extended that lead to three points shortly after with two free throws.

The third quarter was were it all turned south for the Lady Bluejays. Cape Central's defense began to take affect as they outscored Charleston 26-13 in those eight minutes. Charleston was 5-of-10 from the field while the Lady Tigers shot 10-of-18.

Two free throws from Cooper at the 4:23 mark gave Charleston their final lead of the night, 36-34. An 8-0 run that began with a bucket from Paige Smith eventually led to a 50-38 lead at the end of the third quarter.

"That's always a big thing for us," Cape Central head coach Sherri Shirrell said about their press. "We've really relied on our press this year and it's gotten us back into several close games."

A basket by Chelsie Lane to open the fourth quarter made it a 10-point game and was as close as the Lady Bluejays would come to Cape Central again as they went on to be outscored 16-7 in the final period.

"We were in the ball game through three quarters," Minner said. "We just had some bad turnovers. We didn't make them work for turnovers and it cost us the ball game."

Cooper was a bright spot for Charleston as the sophomore led all scorers with 21 points and 18 rebounds. Eneikqua Ewing added 10 in the loss.

Cape Central (11-5) had five players in double figures as Chelsea Pannier led them all with 15 points. Farrah Malik added 13 while Smith and Chelsea Vinson added 12 and 11 respectively.

Sadie Pittman chipped in with 10 points but was a bigger impact on the defensive side as she herself had seven steals. The senior guard was the catalyst to the Lady Tigers' explosiveness in the press.

"She's our leader on the floor," Shirrell said about Pittman. "She's picked it up in a lot of areas this year. Not only is she our ­ and our defender she's also become quite a scorer for us as well."

Malik and Machaela Durham each had five steals apiece while Pannier and Vinson added four themselves.

Charleston shot a dismal 28 percent (14-of-50) from the field while Cape Central was a bit more successful with a 48 percent (24-of-50) field goal percentage.

"It's going to make us better," Minner said about the loss. "We need games like this. It doesn't do us any good for teams not to pressure us. To get to where we want to get, these are the kind of games we need."