Scott City up to challenge, takes down Hunters 57-47 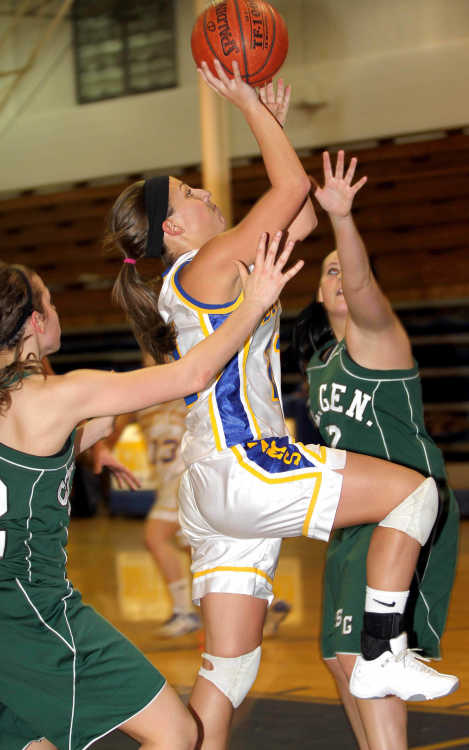 SCOTT CITY -- The Scott City Lady Rams went into Monday's game with Class 4 Ste. Genevieve trying to see how they stacked up with a bigger team. They passed with flying colors.

Scott City got 26 points and 12 rebounds from sophomore Katie Hogan as the Lady Rams defeated Ste. Genevieve 57-47, improving to 11-3 on the season.

"I thought it was a good challenge for our team to see where we were at this time," said Scott City coach Kerry Thompson said. " I think right now mentally we are in a good state of mind as far as our team is concerned and we need to build off this. They are a 4A school and it is a big win for us."

After the two teams battled to a 8-8 stalemate in the first quarter, Ste. Genevieve started to take advantage of the Scott City zone and built a 20-14 lead with three minutes remaining in the first half. However, Scott City changed to a man-to-man and held the Hunters scoreless for the remainder of the half.

"We came out in a zone and played a little flat and (Ste. Genevieve) can spot up and shoot it," Thompson said. "That got us behind a little bit early. We switched defenses and got down and played a pretty aggressive man-to-man and I thought that was the turning point in the game."

While the Scott City defense was shutting down the Hunters, senior Stephanie Essner took charge for the Lady Rams on the offensive end, scoring six of the teams' next eight points. Essner hit a 3-pointer to cut the lead to 20-17 and following a Stacey Heisserer basket that cut the lead 20-19, Essner hit an acrobatic layup while being fouled with five seconds remaining in the half. Essner sank the free throw and Scott City took a 22-20 lead into the locker room.

Essner finished the game with 13 points and six rebounds.

"She hit some big 3's for us and had some big steals for us," Thompson said. "I thought our key was our defense. Our defense made our offense start flowing a lot better and we started getting some turnovers and started finishing some shots and getting to the free throw line."

Essner started the second half with a 3-pointer as well to give Scott City a 25-20 lead but the rest of the half belonged to Hogan. The sophomore scored 18 points in the half and pulled down several rebounds against the big and physical Ste. Genevieve post players.

"When I have big people on me, I like to come out and shoot a couple jumpers and they want to come out and guard you," Hogan said. "Normally, people my size are going to be slow, so I just give them a shot fake and drive around them whenever I can."

While Hogan was dominating the middle for Scott City, their man-to-man defense was forcing Ste. Genevieve turnovers. Six Hunter turnovers in the third quarter led to Scott City taking a 38-32 advantage into the fourth.

The fourth quarter was more of the same as Scott City forced five more turnovers and began to dominate the glass, ending the game with a 34-30 rebounding edge over the Ste. Genevieve squad, led by Hogan's 12 rebounds.

"I thought Katie played big tonight and she can do that," Thompson said. "She can dominate the paint along with Ashley (Brant). They feed off of each other."

The Lady Rams sealed the game at the free throw line, hitting 11-of-13 in the final quarter and making 14-of-18 in the game.

"That is one thing we haven't done very well this year is getting to that free throw line," Thompson said. "I thought we got to the free throw line a lot better tonight and I hope we continue that with the teams we are going to play coming up."

While Hogan and Essner led Scott City in scoring, they also got good performances off the bench, including seven rebounds and two points from Stacey Heisserer.

Ste. Genevieve (11-7) was led by Laura Rhodes who finished the game with 23 points. Kortney Campbell finished with 12 points and 13 rebounds.

Ste. Genevieve won the junior varsity game 43-35. Scott City will be back in action Wednesday when they travel to Saxony Lutheran.