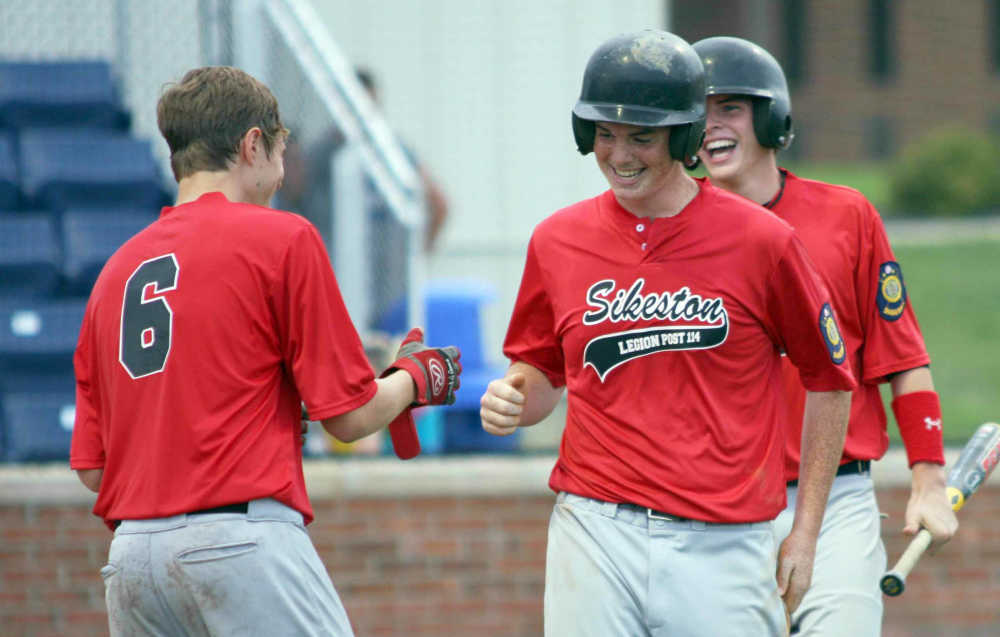 Sikeston's Ross Bohannon (center) is congratulated by Evan Underwood (6) and Mikey Russell (back) after scoring a run in the first inning against the Poplar Bluff Express on Thursday evening. Sikeston won the game 10-6. (Photo by Chris Pobst, Staff)

CAPE GIRARDEAU -- After nearly half of a decade, Sikeston Legion Post 114 has finally won a district tournament game.

On Thursday night, Post 114 collected 12 hits and rode the arm of Paul Fox to a 10-6 upset win over the Poplar Bluff Express at Notre Dame Regional High School during the 2010 District 14 Tournament.

"It's been at least four or five years since we've won a tournament game," Sikeston coach Chris Crosby said. "We had just about everything working for us. I'm proud for the kids."

The No. 5 seeded Post 114 got out to a hot start with three runs in the top of the first inning. With men on first and third, Josh Boese knocked a double into the gap in right-center scoring Mikey Russell from third and also Ross Bohannon who trucked in all the way from first. Boese advanced to third in the process which eventually led to an RBI single from Ben Freed.

Poplar Bluff, however, answered quickly with two runs in the bottom of the first with an RBI double from Jake Smith and an RBI single from Bryn Hester. But Sikeston gave their starter Fox a bit more breathing room in the second inning pushing four runs across.

A sacrifice fly from Bohannon, a bases-loaded walk from Ben Freed and a 2-RBI single off the bat of Evan Underwood gave Post 114 a commanding 7-2 lead.

That extra boost in run support on top of getting those pesky jitters out of the way in the first inning led Fox to four scoreless innings.

"I was just a little nervous starting off and I finally got in a rhythm and went from there," Fox said.

Fox kept that momentum going even through a 30 minute delay because of lightning. He kept the No. 4 seeded Poplar Bluff lineup guessing with his knuckleball throughout his 6 1/3 innings of work.

"It was mostly off-speed," Fox said about his go-to stuff. "I usually go to the fastball but, my knuckleball was working so that's what I went with."

The defense behind Fox was just as good. Post 114 came up with the all-important routine plays as well as the not-so routine ones. They were able to capitalize on a liner to shortstop Cord Sheehy and turn it into a double play after the Express threatened with back-to-back singles to lead off the eighth inning. Sheehy came up big again for the last out with a sliding stop to his right and a rocket to just beat out Austin Brown to end the game.

"Whenever you have the defense behind you it really helps you out," Fox said.

"The defense was there tonight," Crosby said. "They made the plays they were supposed to and helped out when they needed to."

Fox eventually gave way to Ben Freed who inherited two of Fox's runners. He gave up one run on five hits in 2 2/3 innings but was effective enough to keep Post 114 in the winner's circle.

This win against Poplar Bluff means that Sikeston must play the No. 1 seed in the tournament; Dunklin County. That contest is scheduled for today at 8 p.m.