Bootheel Classic set for this weekend 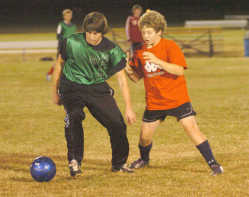 SIKESTON -- Starting Saturday, the Sikeston Area Youth Soccer fields will once again be packed with kids as 128 teams participate in the annual Montgomery Bank Bootheel Classic.

Sandwiched between a similar tournament in Perryville the weekend prior and one in Cape Girardeau the weekend after, the Bootheel Classic will host teams from as far away as Farmington, Kennett and Martin, Tenn.

"Overall things have been going smooth," Hay said of event preparations. "I had a lot more volunteers willing to get things prepared this year. So, so far so good."

This will be Hay's second year as tournament director and first year as organization president after having been involved with the Sikeston Youth Soccer League (SYSL), who hosts the event, for 15 years.

Over those years, Hay said she has seen the tournament grow by leaps and bounds.

With so many teams now taking part, Hay added one of the most challenging things running the tournament is keeping everyone happy with the schedule.

Play will start Saturday at 8 a.m. with the last game of the night kicking off at 7:15 p.m. Play will once again start at 8 a.m. Sunday with the tournament wrapping up with the final championship games starting at 4:45 p.m.

Admission to the tournament is free of charge.

"Anybody can feel free to come out," Hay said. "Looking forward to the weekend getting here and we're excited for everyone to show up and have a great time."