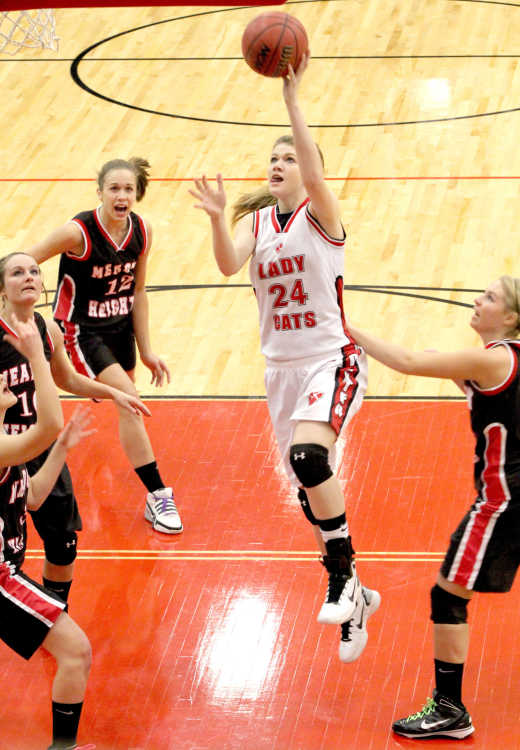 DEXTER -- It is beginning to look like the young Dexter Lady Bearcats basketball team is growing up.

Dexter dominated the Meadow Heights Lady Panthers for three quarters and then held off of a frantic fourth quarter rally to defeat the No. 2 team in Class 2 58-54 Tuesday night at the Bearcat Event Center.

"Overall I think we played an extremely good game," said Dexter coach Chad Allen. "Meadow Heights is a very good ball club. They're senior loaded and have a lot of veteran's on their team. It's a great win for our young ladies."

Dexter, who didn't play a junior or senior in Tuesday night's contest, got off to a good start in the first quarter by using patience on offense. The Lady Bearcats spread the floor against the aggressive man-to-man Lady Panther defense and then used timely cuts and clutch outside shooting by Hannah Noe, who hit two 3-pointers in the quarter, to build a 15-6 lead with 2:08 to play in the first quarter.

"We knew they were going to guard us hard and get in the passing lanes so we tried some curl cuts and right off the bat we got some easy layups," said Dexter's Brittany Harris who finished with seven points in the quarter.

Dexter led 15-8 after one quarter and continued to use precision passing and clutch shooting behind Harris and Alison Jarrell to build a 27-19 lead at halftime all while the Lady Bearcats' match-up zone defense continued to fluster Meadow Heights.

"Early in the game (Dexter) was patient and got good shots and knocked them down," Meadow Heights coach Mitch Nanney said. "We did not move the ball real well early ourselves. There was a lot of standing early on in their match-up zone. We kinda shot ourselves in the foot by being tentative and we weren't aggressive enough for my taste."

After Meadow Heights sliced the Dexter lead to 29-25 on a 3-pointer from senior Heather Dietiker early in the third quarter, the Lady Bearcats went on a 13-3 run to finish the frame. Even with Harris on the bench in foul trouble, Dexter was able to get contributions from a host of players en route to building their biggest lead of the game 42-28.

"When (Brittany) is out of the game we feel like we have to take it in more, try to drive and get fouls because without her in as our post player we can't feed it in as much," said Noe. "Our guards have to step up and show what we can do."

However the Lady Bearcats' youth began to show up in the fourth quarter. Down 14, Meadow Heights used a switch from their man-to-man defense to a full-court press and the change worked. Dexter turned the ball over 12 times and the Lady Panthers began to slowly cut into the Dexter lead.

"We had to make a change down 10, 12 points, to put a run together and see what we could do," Nanney said. "We caused a lot of turnovers there with that but unfortunately we turned it back over sometimes ourselves. We did a nice job, it was a good effort from the girls to get back in the game and give themselves a chance to tie it up or even go ahead."

Despite the turnovers, Dexter still held a 52-41 lead with 2:48 remaining. But the Lady Bearcats, who had not missed a free throw in the first three quarters, went cold from the line, making only 7-of-16 in the final quarter.

Meadow Heights took advantage as Gina Cureton used dribble penetration to get to the basket for easy looks and after her layup with 21.8 seconds remaining, Dexter led just 57-51.

The Lady Panthers then stole the inbounds pass and the Lady Panthers' Erin Bollman was fouled. Bollman hit the first of two free throws and Meadow Heights grabbed the rebound off the missed second shot as the ball got around to Bollman who scored to cut the lead to 57-54.

Dexter was able to get the ball to Noe who was fouled with just four seconds remaining. Noe then stepped to the line and hit her second free throw to seal the game 58-54.

"When it comes down to that we just have to step up and make free throws," Noe said. "I just blocked everything out and came up and tried to make it because i knew it was going to come down to that or them coming down and tying up the game with a three and going to overtime."

Harris led Dexter (13-8) in scoring with 18 points as the sophomore also pulled down a team-high seven rebounds. Jarrell and Noe, both freshmen, added 13 and 10 points respectively.

Cureton and Heather Dietiker both scored 16 apiece for Meadow Heights (16-3). Hattie Cook added 13 while Bollman pulled down 14 rebounds to go with her seven points.