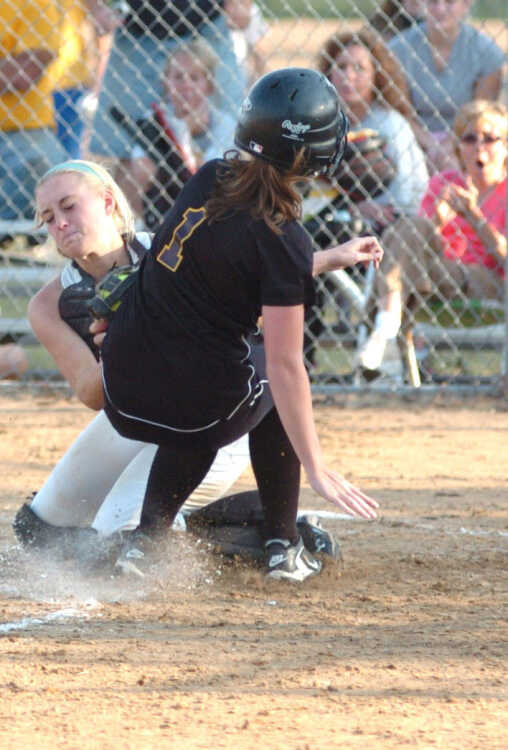 Kelly runner Bridgette Chandler is caught at the plate by Perryville catcher Morgan Baer trying to score on an errant throw to first base. (Photo by Brent Shipman, Staff)

BENTON -- A day after racking up 17 hits en rout to an 11-1 mercy-rule win over Poplar Bluff, the Kelly Lady Hawks saw their offense turn cold on Wednesday against the visiting Perryville Lady Pirates.

Only able to muster five hits on the contest, the Lady Hawks watched the Lady Pirates put together back-to-back two-run rallies starting in the fourth inning and hold on for 4-0 win.

"Their pitcher wasn't anything we couldn't hit," Kelly coach Rhonda Ratledge said. "We definitely we should have put the ball in play better. We stayed so much more focused yesterday (against Poplar Bluff) and just came out and chased some junk today.

"The girl threw junk yesterday and we didn't chase it. We were so disciplined and then today we were completely different girls."

Scoreless through three innings, the Lady Pirates took advantage of pair of Kelly errors in the third to take the lead on a two-run rally.

Starting things off, Aleshia Reiss reached on a dropped throw by the first baseman before Tiarra Sparkman singled to put runners on first and third. It was on a bunt by Hailey Richardet in the next at bat that Perryville took the lead as another missed throw at first base allowed Reiss to score and Sparkman to move to third.

Two at bats later, Sparkman crossed the plate on a ground ball to short to give the Lady Pirates a 2-0 advantage.

Coming back up in the fifth, the Lady Pirates rattled off three straight hits for another two-run rally to make up the 4-0 final. Morgan Baer opened the frame reaching on a grounder down the third base line before scoring on a double by Brittany Young. Closing out the rally, Young then scored on a ground ball up the middle by Destinie Herschbach.

"We made them field the ball and then we took advantage of their mistakes," Perryville coach Jeff Steffens said. "Anytime that somebody else makes mistakes it kind of lifts your team, like you got a break and you have to take advantage of it."

Down, but not out, the Lady Hawks threatened to score in the bottom of the fifth when Samantha Ratledge led off the inning with a single before a walk to Jessica Worth and single by Kaylee Scherer loaded the bases with one out.

Unfortunately for Kelly, a strikeout, followed by a ground ball to the third baseman ended the inning before the Lady Hawks could break up the shutout.

Trying to make some noise in the seventh, Samantha Ratledge once again led off with a single as Kelly made one last push. Protecting her shutout, Perryville's pitcher Casey Hotop then produced a ground out before a Lady Hawks runner was caught trying to score on a missed throw to first base. A subsequent popup to the shortstop ended the game.

"We had the bases loaded and couldn't produce," Rhonda Ratledge said. "Not even our seniors could produce today. That's just heartbreaking at this point."

Leading the Lady Hawk's (11-6) five-hit effort was Samantha Ratledge as she finished the contest 2 for 3 with a a pair of singles. Scherer and Sydney Vinyard also had a singles while Jade Rampley provided the team with their only extra-base hit of the afternoon, a triple in the first inning.

It was on Rampley's triple, a shot down the right field foul line with one out, that Kelly was given the chance to put Perryville in an early hole. Trying to score on an unsuccessful squeeze attempt, however, Rampley was picked off before a strikeout ended the inning.

"Right off the bat in the first inning Jade hit a triple," Rhonda Ratledge said. "We tried twice and couldn't get a squeeze down. We had a fast runner at third and it could have been a 1-0 ball game."

For Perryville (12-5), who combined for eight hits, Kelcie Fahnestock and Young were both 2 for 4 with a double. Baer, Herschbach, Sparkman and Richardet had a single each.

In picking up the win, Hotop went the full seven innings for the Lady Pirates, allowing four hits and one walk while striking out six.

"Casey did a good job again today," Steffens said. "She has two shutouts back-to-back now so she's pitching really well, constantly around the plate, and giving us a chance in every game."

Next up, Kelly will host Notre Dame on Monday at 4 p.m.