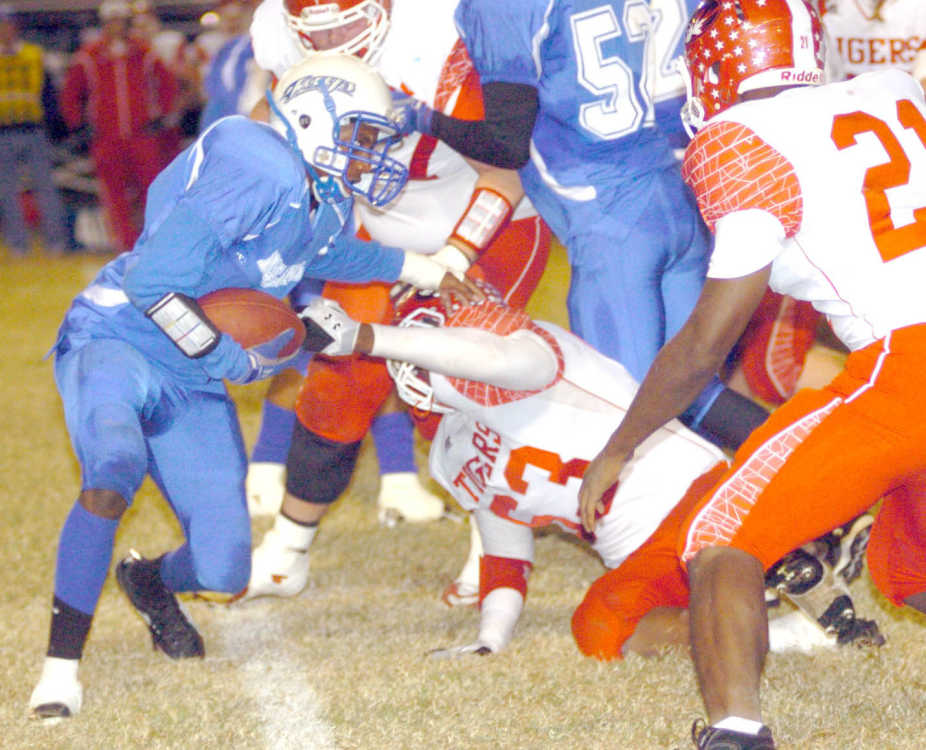 Charleston's Jamaul Gray has run for 914 yards and scored 11 touchdowns for the Bluejays. Charleston will travel to Crystal City tonight to take on the Hornets in a Class 2 regional. (Photo by Brent Shipman, Staff)

CHARLESTON -- Back in the postseason for the first time since 2007, the Charleston Bluejays will face a tough road test tonight as they get set to play the Crystal City Hornets.

"They know it's a big game," Charleston head coach Brett Blackman said of his kids. "We've had a good week of practice and hopefully we're ready to compete. The kids are fired up, we're in the playoffs and we're going to see what we can do.

"We'll have to make the drive up north, so we'll have to be disciplined and focused throughout the trip so we're ready to play when it comes time."

Featuring a three-headed rushing attack of Maurice Moore, Jamaul Gray and Rontavious Clark, the Bluejays will once again look to their running game to keep up with Crystal City's high-powered attack.

Led by Moore and his 933 rushing yards and five touchdowns on the season, the Bluejays ground has averaged 369 yards per game over the last four games in which Charleston has only lost once.

Following closely behind Moore is Gray, who has 914 yards and 11 touchdowns, while Clark has 631 yards with six touchdowns. Gray also serves as a home run threat on kick off returns.

"We can't have any turnovers," said Blackman. "We can't stall any drives. Maurice and Jamaul they need to get out and run and Ron needs to do what he does best.

"We're going to have to be disciplined and I big thing for us is shedding tacklers."

The Hornets have an opportunistic defense, intercepting 27 passes on the season. Thornton leads the team with eight interceptions while Helwig and junior defensive back Justin Morris (5-8, 140) each have six interceptions. Senior Jacob Carr (5-9, 198) leads Crystal City in tackles with 51.

For the season, Crystal City is averaging 30.9 points per game while allowing 20 points per game. The Hornets have won five-straight games allowing just 62 points in that span while scoring 188.

"They have a good quarterback. They run a little option too, so we have to prepare for that. I think our kids picked it up pretty well (in practice) and now it's just taking it over and seeing if we can manage things like playing on field turf and stuff like that."