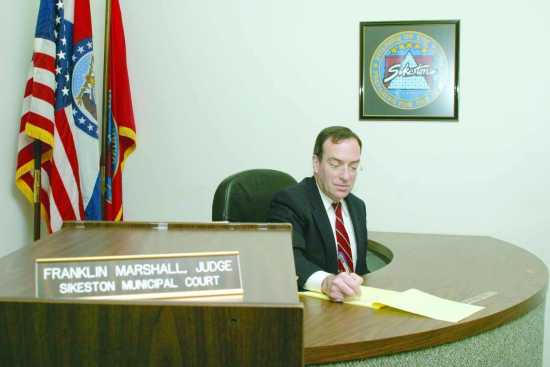 SIKESTON -- Twenty years ago this month, Sikeston's municipal judge sat behind the bench for the first time.

Frank Marshall was hired to serve as the city's judge in November 1991 after the municipal judge at that time, Fielding Potashnick, retired from the job.

"I believe he had been municipal judge for 20 or 25 years. I seem to recall thinking at the time that was an awful long time to be a municipal judge -- and now here I am," Marshall said. "It doesn't seem like it's been 20 years."

Marshall said becoming a judge wasn't a planned career move for him.

"I had been practicing law for seven years. I don't recall ever thinking when I was in law school that I was doing it so I could be a judge someday; I was focusing on practicing law," he said. "The opportunity came along and I thought it might be something I'd like to do."

Serving as a municipal judge in a smaller community means having neighbors and even friends appear in court from time to time.

"When you see people you know, you have to treat them the same as you treat a stranger," Marshall said.

Even more difficult to deal with is the people a judge gets to know in the courtroom, however -- the "repeat offenders who just keep coming back," he said. "It's hard not to be frustrated with people who don't seem to understand why they are in court repeatedly. I think that's a challenge every judge has to deal with while trying to keep an even keel."

Thankfully, some of those who regularly appear in city court finally get the message they are "going down the wrong path and they make a change," Marshall said. "They turn their lives around, get their diploma or GED -- some go on to enroll in one of the area colleges."

There is one issue that municipal judges in other communities have commented on that Marshall said he is happy to have never faced.

"I get to talk to a lot of other municipal division judges and I hear some of their horror stories. One thing I've never had to worry about or deal with in Sikeston is any pressure or undue influence from any Council member or city administrator I've worked under," he said. "That's never been an issue in Sikeston -- which I appreciate. I commend them on it."