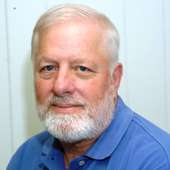 Our connection to the Mississippi River in New Madrid is not what it used to be. Until the arrival of the railroad in the 1890s and then the automobile and improved roads after the turn of the century, all commerce and travel was on the great river.

The river affected many lives in various ways.

By the late 1920s the Packet boats that carried people and goods up and down the river had long ceased to run, but you still might hitch a ride on one of the working boats like the Transporter if you knew a member of the crew. 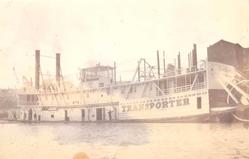 The Steamboat Transporter in port on the Ohio River. Note the unusual central location of the pilot house. [Photo courtesy of Martha Hunter]

Considered the last of the great old fleet of powerful steamboats, the Transporter had an interesting history. It was built in the 1880s and christened the Joe Nixon to haul coal from the Monongahela River to Louisville. Its pilot house was located in the center of the top deck, and it was the only boat of its kind on the upper Ohio.

Later, the Walton Coal Co. purchased the craft and renamed it Valiant. Walton was taken over by the Pittsburgh Coal Co. and in 1921 Pittsburgh sold it to the Water Transport Co. Rebuilt at Elizabeth, Penn., at a cost of $138,000, it was christened the Transporter for service on the lower Ohio. 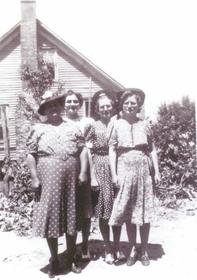 The Higgerson sisters beside the A. J. Higgerson home at Higgerson landing in 1942. From left to right: Anne, Mary, Alice and Hattie. Alice and Hattie survived the sinking of the Steamboat Transporter in 1927. [Photo courtesy of Martha Hunter]

The Transporter began hauling manufactured steel from Pittsburgh to Memphis, and it is here that our story becomes local. Bound upriver in 1927, it was pushing its 12 empty barges back to Pittsburgh when it reached New Madrid. Bend. The river was in flood and the Higgerson family was living on the second floor of their home at Higgerson Landing, when Hattie Higgerson boarded the Transporter for a trip to Cincinnati. Alice and Edgar Taylor were on board also. Alice was Hattie's sister, and Edgar Taylor worked as a steward on the boat. The Taylors lived in Cincinnati.

That night at about 6 p.m., when the boat was 20 miles above Cairo, a powerful tornado crossed the river and hit the Transporter.

Captain Forman described the event: "The cyclone came up without a minutes warning, the boat was first blown to the Kentucky shore, then a twister came and blew the craft toward the Illinois shore, the pilot house was blown off, doors, windows and glass flying, timbers cracking, life boats were blown away, waves lashing higher than a two story house were rolling."

The Captain ordered everyone onto the barges for safety and cut the boat away and it sank. When it boilers reached the water a large cloud of black smoke arose. Everyone had made it onto the barges except the fireman who was blown away and killed. The drenched survivors aboard the barges drifted on the wide and dark river. A crew member lashed a couple of planks together and swam to shore for help. A rescue boat arrived about midnight and took the crew and passengers on board.

For the rest of her life, Hattie Higgerson had an uncontrollable fear of the slightest storm or any threatening weather. Recalled her niece recently, "We never knew what was wrong with her until we found the newspaper article about the sinking of the Transporter."

It was an unforgettable trip on the river for Hattie Higgerson.