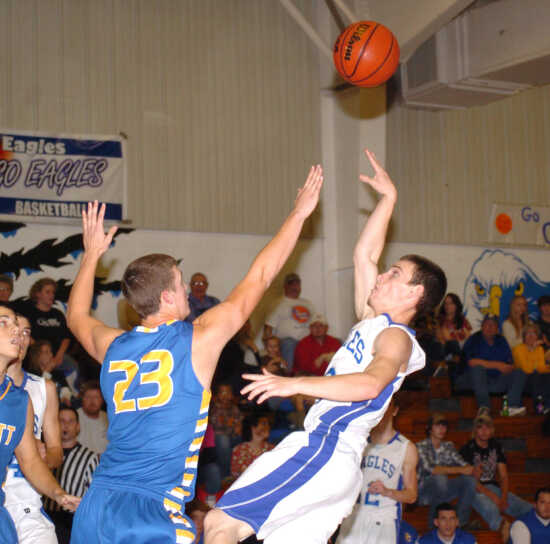 ORAN -- With a chance to atone for one of last season's worst losses, the Oran Eagles didn't disappoint.

Senior Kody Moore led the way with 27 points as the Eagles flipped the script on a 39-point loss to Scott City last year in a 88-63 rout Friday that moves Oran to 4-1 on the season.

Heuring had 14 points on the night and was important down low, but it was a big first half from Moore the got Oran going.

Moore scored nine of his team's first 16 points as the Eagles took an early 16-7 lead and never looked back.

He finished the first half with 21 points, including four 3-pointers, as Oran pushed the Rams back 46-32 going into the half.

"There toward the end of the half they were really focused on where he was at," Shoemaker said of Moore. "He did a very good job and the other guys did to of recognizing that and it left other people open a lot for us.

"When he starts well for us like that it makes it a lot easier."

After a slow start by Oran, the third quarter was where they barely outpaced Scott City 11-10. The Eagles picked things up with just over two minutes to go in the frame.

Scott scored five-straight points to close back within 20 points late in the fourth frame, but an 8-2 Eagle run to finish the game prevented them from coming any closer.

"We definitely put together a good ball game," Moore said. "But there was some times we kind of slacked off on the defensive end. On the offense end there was times we were a little lazy with the ball as well.

"When we put together four complete quarters we should be pretty tough to beat, but we're still working on that right now."

As part of his game-high 27-point effort, Moore was especially effective at close range, shooting 6 of 8 (75 percent) from inside the arc and 10 of 17 (59 percent) overall. He added four rebounds and four steals to Oran's cause.

Seth Ressel was second on the team with 17 points, hitting 7 of 10 shots.

Chance Tenkhoff and Priggel finsihed with 16 and 14 points respectively while Heuring added seven rebounds and two assists to his 14-point night.

For the Rams (2-3), Jesse Sanders had a team-high 17 points with Ryan Brock and Dillon Brown contributing 13 and 12 points each.

"They're just better than we are and it showed," Scott City head coach Mark Dannenmueller said of Oran. "They beat us in every facet of the game. They outworked us, played better defense and out-rebounded us."

The Rams took a 14-11 lead following the first quarter, but were outscored 16-8 in the second. A big third frame, where they outpaced the Rams 20-6, ensured an Eagle win.

Jason Bennett had 17 points for Oran with Anthony Pobst and Garrison mangels scoring 13 and 12 points each.