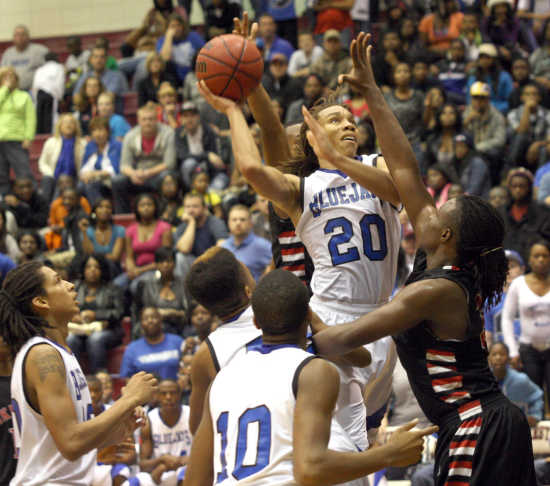 Charleston's Ryan Parham (20) goes up for a layup while being contested by Sikeston's J.T. Jones Friday during the SEMO Conference Championship at the Sikeston Field House. (Photo by Chris Pobst)

The second-seeded Sikeston Bulldogs upset top seed Charleston on Friday night, 71-61, in front of an intense and frenzied crowd at the Sikeston Field House in the 7th Annual SEMO Conference Tournament.

Both teams came into the contest undefeated and ranked No. 1 in Class 3 (Charleston) and Class 4 (Sikeston) in the latest MBCA/MoSports.com coaches poll.

Friday's game had a playoff-type atmosphere as the Bulldogs led by as much as 17 points in the third quarter and had to hold off Charleston's rally in the final quarter.

The Bluejays (5-1) got as close as three points with 1:10 left, but the Bulldogs hit clutch free throws and had key defensive stops to ice the victory.

"It's Charleston. Our rival. It's always going to be a battle with them," Sikeston forward J.T. Jones said. "I'm happy we got our title back."

The final quarter was a wild one.

But the Bluejays' turned up the full-court defensive pressure and caused several turnovers, allowing them to eventually cut the lead to 64-60 on a Delfinko Bogan step-back 3-pointer with 1:30 left in the game.

After getting a defensive stop, Bogan drove in for a layup and was fouled. His shot appeared as if it was going to fall, but it rolled off the rim, just missing the "and-one."

Bogan missed the first free throw and made the second, cutting the lead to 64-61 with 1:10 left in the game.

After Sikeston broke the full-court press, Ruffin was fouled with 54 seconds left. He made 1 of 2 to make it a two-possession game.

On the ensuing trip, Ruffin stole the ball and kicked it up ahead to a streaking Zach Jackson for a breakaway layup, but Charleston's Sumner Foster blocked the shot off the glass from behind, only to see a hustling Ruffin score the putback, extending the lead to 67-61 with 38 seconds left.

The Bulldogs got two more defensive stops and Ruffin then iced the victory with four consecutive free throws in the final 16 seconds.

The senior point guard finished with 17 points, six rebounds and a career-high 12 assists.

"I thought Vashawn was as good as he's ever been tonight," Sikeston coach Gregg Holifield said. "He played the entire game -- he never came out. He just worked as hard as he could and did everything he could to help us win the game."

Ruffin's performance was even more impressive considering he was defended most of the night by one of the state's premier guards in Ryan Parham.

Parham struggled against Sikeston's defense, scoring just eight points, committing several costly turnovers, and then being taken out after cramping up late in the game.

The first quarter saw the lead change hands seven times as Sikeston's Reese Porter scored an inside basket to give the Bulldogs a 16-15 edge after one.

The lead changed four more times to start the second quarter before the Bulldogs began to surge ahead for good, going on a 15-0 run to lead 33-19.

Kyland Gross' 3-pointer from the right corner with 3:32 left in the half gave the Bulldogs a double-digit lead that they would keep until the end of the third quarter.

The Bulldogs led by as much as 15 late in the second quarter on a Jones offensive putback.

Following a steal, Jones drove in for a layup only to see Foster block it off the backboard. The impressive athletic play by Foster triggered a fastbreak for the Bluejays in which Foster hustled back to score at the buzzer on an offensive putback, cutting Sikeston's lead to 36-23.

The Bulldogs continued to control the game throughout the third quarter, holding its largest lead of the game at 42-25 on a Ruffin drive to the basket with 6:54 left in the third.

The Bluejays were able to trim the lead to single digits late in the period, but a Sheehy offensive putback on a missed free throw gave Sikeston a 46-35 lead entering the fourth.

"We got out-played," Farmer said. "I thought Sikeston was the more physical team. They played the hardest and they won the game."

Sikeston's zone press and half-court zone defense gave the Bluejays fits as they turned the ball over 21 times while never getting comfortable on offense. Charleston was just 2 for 21 from 3-point range.

Sikeston also out-rebounded the Bluejays 36-26 in the game.

"They play a very good zone," Farmer said. "They have always played great defense. We also got killed on the boards. I thought the boards was one of the biggest deals on why they got ahead. And we turned the ball over too much."

Jones led all scorers with 21 points and eight rebounds.

But while Ruffin and Jones continued to play well, Holifield pointed out the hustle plays of his other players, including Sheehy, who had five rebounds and three steals.

"In our two-spot, Kyland and Cord fill up a stat-line," Holifield said. "They're on the floor, they're getting loose balls. They're working hard defensively. They do everything they can to help our team. And that's what we're about. We're a total team effort and I felt like tonight that's how we played. All of our guys came off the bench. Jeterrence (Harris) had a big charge drawn, Jairius (Ray) rebounded well. I'm just so proud of all of our players."

"We have inexperience on the floor at times and our kids really matured right before our eyes it seemed like," Holifield said. "They really stepped up and did an outstanding job in front of a great atmosphere. It doesn't get any better than that game right there. It helps prepare us for district play and postseason. Every time we play (Charleston) it's this type of atmosphere. It's this type of intensity. I'm just so proud of our players for playing under control and handling the situation as well as they could."

"We were out of rhythm. We were out-rebounded, out-hustled. The little things," Parham said. "We knew what to expect from Sikeston. They're a real good caliber team. This is our first loss. We will come back and fight hard the next game."

Charleston will try to rebound from the disappointing loss on Tuesday when they host Meridian, Ill. Farmer hopes to use the game as a learning experience for his team.