Lady Bluejays hold on against Kelly 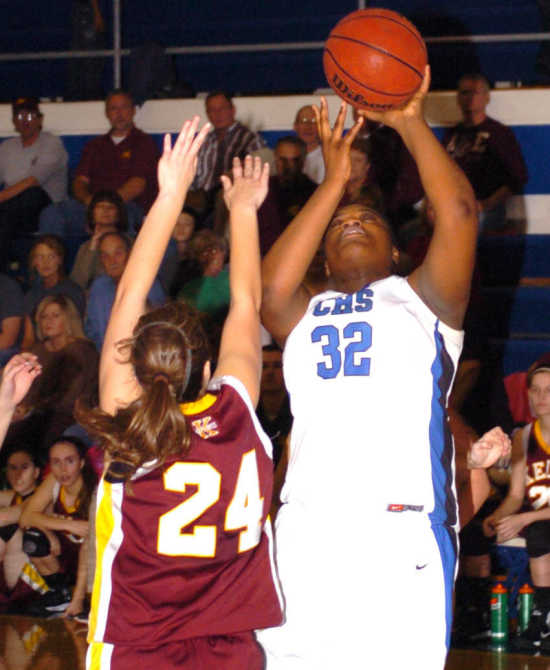 CHARLESTON -- After Saturday's 34-point loss to Twin Rivers, Charleston head coach Josh Thompson wondered how his girls would respond to such a poor outing.

He got his answer Monday night when they Lady Bluejays held off a relentless second-half push by the Kelly Lady Hawks for a 75-71 win.

"I was nervous to be honest with you," Thompson said. "I thought they'd come out strong. I wasn't 100 percent sure, but they sure did."

After a fiery halftime speech from head coach Rod McQuerter, however, Kelly (7-10) came out of the break and quickly dug into the Lady Bluejays' lead.

Back-to-back baskets in the first minute of the half kicked off the rally and four minutes into the third quarter, the Lady Hawks had put together a 12-3 run.

Charleston called a timeout to regroup and a quick layup followed to end a nearly three minute scoring drought. Kelly responded with a pair of baskets from Morgan LeDure as part of a 6-0 rally that closed the gap to just three points, at 50-47, with 2:22 left in the third frame.

"I don't do it often, but I had to let them know that these are very big games," McQuerter said of his team's halftime conversation. "They need to understand what big games are. This is what we play for right here, against good district competition.

"We've been playing well all year so far and these girls proved tonight that we can play well against great teams also."

Though the Lady Hawks turned a near blowout into a one-score contest, the one thing they were never able to do was force Charleston to relinquish the lead.

They came closest just 30 seconds into the fourth when a LeDure 3-pointer had them within a point of the Lady Bluejays, at 57-56, but were quickly pushed bask by another Charleston rally.

Following LeDure's three, the Lady Bluejays took advantage of a few Kelly turnovers to start a near four minute run that where they jumped ahead 71-59 with 3:26 to play.

Down but not out, the Lady Hawks proceeded to make one final attempt at a comeback, scoring six consecutive points to get back within five points with two minutes remaining.

Kelly continued to push shrinking Charleston's lead to four on a 3-pointer from Tessa Johnson with 54 seconds remaining. Johnson then stepped up and hit a pair of free throws with 17 seconds to play putting the Lady Hawks back within a score at 74-71.

Unfortunately for Kelly, Charleston inbounded after Johnon's trip to the charity stripe and burned nine seconds off the clock before the Lady Hawks could foul. Dazique Gillespie stepped up and hit one of her free throws to once again make it a two-score game.

Closing out the game, Kelly turned the ball over on their final trip down the court to seal a Charleston win.

"Kelly's physicality got to us a little bit there in the third quarter," Thompson said. "We never got down and always kept that lead, but they kept getting closer and closer.

"We put out starters back in with about three minutes to go and made a big run to push that lead out. I'd have liked us to finished the game a little better, but a win is a win."

Hurting Kelly's comeback attempt late in the fourth was the 36 fouls the Lady Hawks accumulated by the final buzzer. This left them without four girls, who had fouled out, in the final seconds, including their leading scorer, Johnson, who had a game-high 26 points.

Another problem was Kelly's inconsistency at the foul line, where they hit on only 18 of 31 attempts (58 percent) on the game.

"We don't complain about free throws, fouls or anything like that during the game," McQuerter said. "It's basketball and those things happen. Give Charleston credit, they played a great game.

"They had an excellent game plan and came out to win tonight. I hope we proved to our girls that we can compete against some of the good teams in the state."

For Charleston, Sierra Frazier scored a team-high 24 points with the majority coming from the free throw line. Frazier hit on 14 of 23 (61 percent) shots from the charity stripe while adding five buckets to the Lady Bluejays' cause.

E'Neikqua Ewing was second on the team with 21 points, including 16 in the first half while Gillespie contributed 10 points.