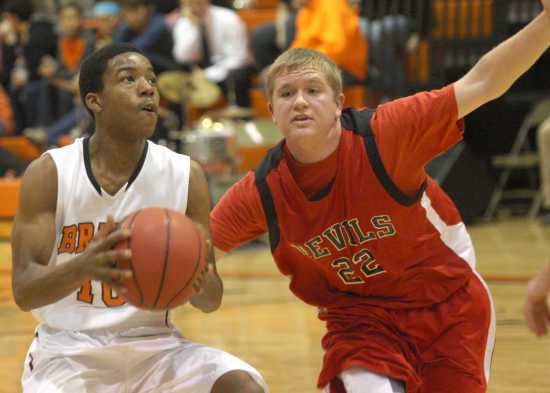 The formula has remained the same during their current winning streak and Chaffee head coach Josh Govreau knew what had to be done if his Red Devils wanted to knock off the Braves. 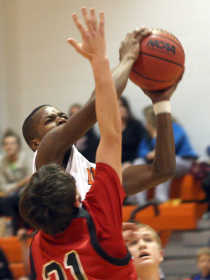 "We knew for their Homecoming and coming into their place that we'd have to match their intensity and rebounding," he said. "We didn't do it."

Scott County Central prompted Chaffee mistakes with their pressure defense and eventually wore down the Red Devils in the second half leading to a 91-68 win during Homecoming for the state-ranked Braves.

Scott Central (12-4) is ranked third in Class 1 and bounced back from their most recent loss to Charleston on Jan. 17 to pull off their fourth-straight win.

Jeffery Porter led the Braves with 20 points on an almost perfect 7 of 8 shooting from the floor. He shot 5 of 8 from the free throw line and had six rebounds and three steals.

LaRandis Banks finished with 17 points on 5 of 9 shooting. He also led the team with eight rebounds. Juwan Owens and Javonta Daniel each scored 14 points.

"We just want to keep drilling in our guys heads is that we want to keep pushing and do what we do," Scott County Central head coach Frank Staple said. "I think our conditioning will eventually become a factor and I think it did tonight." 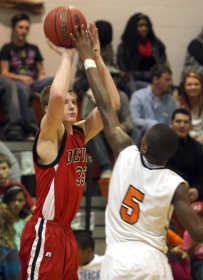 Chaffee received a game-high 24 points from Charlie Montgomery. Layton Tenkhoff added 21 and Trevor Morehead, who was a focal point of Scott Central's defense, finished with 16.

Though they've lost their previous two games, Chaffee has won four of their last seven. Not counting their 23-point loss to the Braves, Chaffee has lost two games during that stretch by a total of six points after losing, arguably their best player, Peyton Montgomery, to a shoulder injury.

"It's been a few weeks since that happened so we can't use that excuse anymore," Govreau said about Montgomery's absence. "We've played some good basketball the last two weeks. Besides this game we have something to be proud of and looking forward we can't let this affect us."

It looked as if Scott Central would put away the Red Devils early.

During Chaffee's first two possessions, the Braves' full-court pressure coaxed their opposition into a steal and a 10-second violation. The Braves raced out to a 9-4 lead directly after.

A 3-pointer from Charlie Montgomery pulled Chaffee to within two, 9-7, halfway through the first quarter, but that was as close as the Red Devils would be to catching the Braves the rest of the night. 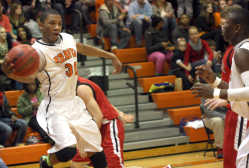 Scott Central led by seven to end the first quarter and could have widened their margin had the Braves been more successful on the offensive end, according to Staple.

"We missed a lot of layups tonight," he said. "I'm hoping that's an anomaly and not the norm. You have those nights but you have to keep pushing."

Morehead, a physical post-man, has had success under the basket for most of the season, but the Braves never allowed the big man to gain any rhythm with double teams collapsing on him every time he touched the ball.

"That kids a beast," Staple said about Morehead. "The key for him tonight was to just have two guys on him at all times. We wanted somebody in front of him and another behind him. We did a good job of that in the first half and kind of took him out of the game. He didn't destroy us."

On top of keeping Morehead under wraps, the Chaffee junior fell under foul trouble in the first half. He committed his third foul with 6:19 left in the second quarter and was forced to the bench.

"He's been playing really well the last few games and they knew that," Govreau said about Morehead. "They were really focused on him. He got in foul trouble and I also had Layton (Tenkhoff) and Storm (Estes) with three fouls. (Morehead) makes a huge difference. They have to have more than one guy guarding him or he's going to score." The Red Devils continued to exchange baskets with the Braves but at quarter's end, Scott Central led 38-26 at the half.

"I told them at halftime that we didn't play very well in the first half and we had a few turnovers, but we weren't giving them layups out of those turnovers which is key," Govreau said. "You're going to have some turnovers against their pressure, but if you can limit them and not give them layups out of it you can find yourself in games."

Chaffee (13-7) gradually fell behind early in the third quarter. A bucket by Tenkhoff halfway through the frame cut Scott Central's lead to 49-35, but a quick 10-2 run by the Braves began the separation.

Scott Central ended the third quarter with a 19-9 run and led 70-44 to start the fourth.

"We just didn't rebound," said Govreau. "A good offensive team like Scott County, you can't give them more than one look. They continued to get rebound after rebound and that's something that will pile up on you. It's something we couldn't overcome. In the second half I didn't think we did much better rebounding. We never gave ourselves a chance to get stops or make a run at them."

Chaffee with play Oran on Tuesday for the third time this season. They've lost both of their previous meetings.

Scott Central will travel to Kelly on Tuesday.