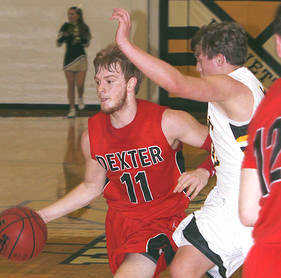 Dexter led by as many as 13 points in the first half and led by nine early in the third quarter, but fell victim to an Indians' comeback in a 76-61 loss here Friday night.

The Bearcats (5-13) drained five 3-pointers in the second quarter and nine in the game,

opening the period on an 8-0 run to take a 26-18 lead on an Ethan Flowers trey with 6:32 left before halftime. The 'Cats pushed the lead to 13 points twice, the last time coming on an Austin Chesser triple with 1:16 remaining before half that made the score 39-26.

"We can drive and kick," Dexter coach Rob Nichols said. "We've got some good young players and some good perimeter shooters. I thought we did a good job of going to the post early in the game. We'd move the basketball and get some reversals, then we'd get a lob in there where there wasn't any weakside help."

Kennett began to rally from there, closing the half on a 7-0 run to make the score 39-33 at the break.

"I thought we played really well in the first half," Nichols said. "The last 30 seconds of the first half, we had a couple of turnovers that let them get a 7-0 run and get a little momentum going. The second half they came out exactly like we knew they would, jumping passing lanes...and they got two or three quick turnovers right off the bat there."

The Tribe got within four points early in the third period on an Antavies Drake bucket that made the score 41-37 with 7:24 remaining in the third, but a basket by Peyton Pollock and a 3 from D.J. Dowdy pushed the Dexter lead back to nine (46-37) less than a minute later.

That's when Kennett came alive, going on a 12-0 run to take its first lead since the middle of the first quarter on Drake's three-point play with 4:21 left in the third period that made the score 48-46 in favor of Kennett.

The 'Cats took their last lead of the night on another Flowers trey with 3:03 remaining in the third that put Dexter up 51-49, but Kevonte Mitchell scored six straight points to give the Tribe a lead it would not relinquish again.

"I thought we hit a lull there right at the end of the third quarter where we just didn't score much," Nichols said. "You've got to keep scoring when you're on the road."

Mitchell led all scorers with 30 points, his fourth straight game of 30 or more. Even more importantly, Mitchell scored 19 of those points in the game's final 11 minutes when the Tribe took the lead for good.

"I thought Kevonte asserted himself there at the end," Nichols said. "He really started put his head down, going to the rim and making us stop him. He hit some shots."

Chesser and Dowdy led Dexter with 15 points apiece, while Flowers added 12, Cole Renken chipped in 10 -- eight in the opening period -- and Pollock finished with nine.

Drake added 15 points for the Indians, while Andre Oliver added 14.

The Bearcats host Poplar Bluff on Tuesday to open a four-game stretch to ed the regular season.

"We've got a tough slate of games," Nichols said. "We're going to have to come out with the kind of effort that we had in the first half to be competitive."