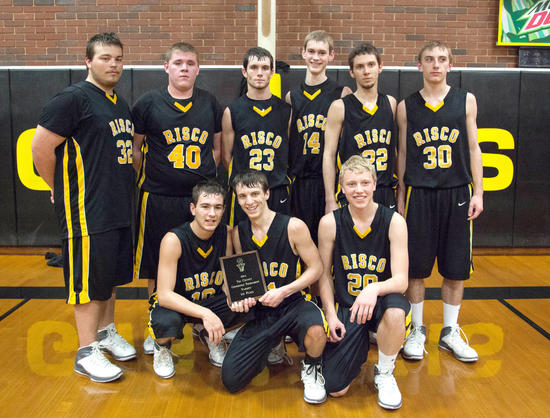 GIDEON - After four straight second-place finishes in the Tri-County Conference varsity boys basketball tournament, claiming the conference title was a focal point for the Risco Tigers entering the 2013-14 season.

"It was a goal at the beginning of the year for these guys," Risco longtime coach Brandon Blankenship said. "We've got a good group of kids and we've really been playing well these past three or four weeks."

No. 2 seeded Risco achieved its Tri-County Conference mission Friday night at Gideon when it outscored the top-seeded Clarkton Reindeer 20-5 in the fourth quarter to secure a 68-55 championship win against Clarkton.

"The fourth quarter our guys stepped up, and they stepped up big defensively on the boards," Blankenship said. "We finally took care of the ball better and made some big plays.

"It's super duper special," Blankenship added. "We've lost the Tri-County Conference championship game the last four years. This is our fifth time in a row in the finals and we finally got it done."

The path to victory was anything but easy.

An electric start gave Clarkton a 15-7 advantage with about a minute left in the first quarter.

"I felt like we were prepared early," Clarkton coach Dustin Ferguson said. "The kids stuck to the game plan and got after it. They got a couple of steals and got to the basket early."

Risco made up ground fast as it scored the next eight points to force a 15-15 stalemate with 7:07 left in the first half.

Neither team led by more than two the rest of the half.

Risco entered halftime with a 33-32 lead and scored the first six points of the second half to pad its advantage to 39-32 with six minutes left in the third quarter. Clarkton erased the deficit less than four minutes later when it tied Risco at 44-44.

"We talked about at halftime coming out strong and trying to win the third quarter," Blankenship said. "We were playing well then Clarkton made that run. We knew they weren't going to go away. They play too hard to go away and expected the run."

Risco led 48-44 before Clarkton scored six points in the final second of the third quarter to move ahead 50-48 at the start of the fourth quarter. The trouble started for the Tigers when Marco Alvarado converted an old-fashioned 3-point play with one second left. Risco then threw an inbound pass out of bounds near the Clarkton cheerleaders. After a timeout Reid Morgan hit a 3-pointer to give Clarkton a 50-48 lead.

Alvarado connected for a trey with 7:18 remaining in regulation to give Clarkton its final lead at 53-50.

Risco scored the next 18 points to move head 68-53 with a minute remaining in regulation.

"They were just way more physical," Ferguson said. "I felt like their kids wanted to beat us really bad. Hats off to them for the intensity and physicality they brought."

"That's been who we have been the whole year," Ferguson said. "We don't have one guy we think is going to score 30 or 40 every night. We just have a bunch of guys who chip in."

Jordon Pavy tallied half of his team-high 26 points for the Tigers in the second quarter.

Risco center Brandon Bixler had a monster second half. Bixler tallied 13 of his 25 points in the third quarter.

"We talked about trying to establish Bixler," Blankenship said. "Pavy had a big second quarter and we figured they would come out and try to key on him a little more. Our counter for that we thought was to pound it inside to Bixler and Brandon responded with some big buckets. He's a horse for us and we are proud of him."

Blankenship said Risco has won seven of its last eight games to improve to 13-8 on the season.

"I think we are coming together," Blankenship said. "I don't know if you would call it peaking at the right time. I just think we've kind of got things figured out. Guys know their role and I feel like I have a veteran team. A lot of these guys have been through this district before so they know what it takes. I think that is a big plus for us, too."

Clarkton, which beat Risco 75-63 in a regular season meeting at Clarkton Jan. 14, has already received the No. 1 seed in Class 1, District 1. Risco, which will host the district, is seeded No. 2.

"Moving forward we've got to get more physical," Ferguson said of potential rematch with Risco in the district championship. "We talked about it in the lockerroom that we wanted this one, but the real important one is coming up. We will see them again, hopefully, if we get past some pretty good teams in our district and get to the final. Our focus is to get stronger and more physical every day and hopefully get another shot at them in two weeks."