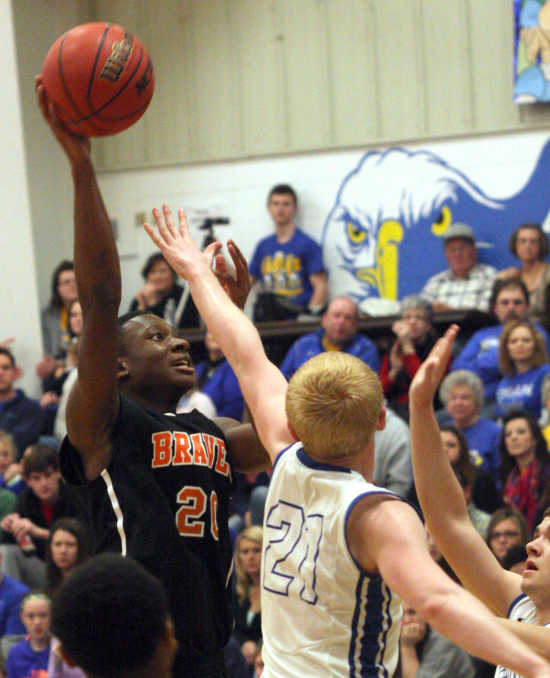 ORAN -- When it comes to Oran and Scott County Central, it's all or nothing.

Last season the Eagles broke a decade long drought against the Braves to sweep their three-game season series.

On Friday Scott Central turned the tide back in their favor by picking up their third and final win in this year's series with an 85-68 decision at the Eagles' Homecoming.

"It's hard to play Oran because they're really good," Scott Central head coach Frank Staple said. "We've played them three times this year and they've been three battles. So I have all the respect in the world for them. I'm just glad it's over."

After a back-and-forth first half the Braves grabbed a little momentum late in the second quarter to take a five-point advantage into the break, 38-33. Though Scott Central pulled ahead by double-digits midway through the third period, Oran responded and closed back within eight points, 65-57, entering the fourth. 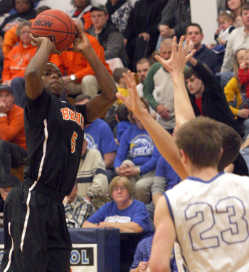 Playing catch up all game soon got the best of the Eagles, however, and the Braves put together their best five minute stretch of the game. They outscored Oran 16-6 during the run to pull ahead 18 points with just over three minutes to play.

With a comfortable lead, Scott Central slowed the tempo down the final four minutes of the game and forced the Eagles to send them to the line. They connected on nine straight free throws at one point and finished the fourth quarter 11 of 13 at the foul line to close out the win.

"Like I always say, any win is a good win," Staple said. "Obviously there is some things I think we have to work on a little bit, but I thought in the fourth quarter we buckled down and were able to get some stops and had some better offensive possessions to pull away a little bit."

"We were giving up too many easy lay ups so I think we just kind of locked down defensively. We were trying to get out and run the whole game and finally that fourth quarter we were able to do it."

Senior LaRandis Banks and sophomore Jeffery Porter tied for a team-high 21 points with Banks shooting 9 of 16 (56 percent) from the floor and grabbing four rebounds, four assists and two steals. 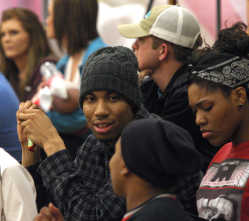 Porter connected on 5 of 9 (56 percent) attempts while collecting four rebounds, five assists and a pair of steals. He went a perfect 10 of 10 at the foul line, all coming in the fourth quarter.

Kendall Blissett was the third Brave in double-figures, scoring 14 points, shooting 6 of 11 (55 percent) and finishing with a team-high six rebounds.

"They're going to go on runs and we knew it, but we have to limit them," Oran head coach Joe Shoemaker said of Scott Central. "We had to spend so much energy trying to get back into it. We gambled a little bit with the press and gave up some lay ups. But that's how I am. We're going to try and gamble and see what we can do. It just didn't work out for us."

Oran's loss comes despite a stellar 27-point performance from senior Seth Ressel. Ressel had 11 points in the first quarter alone to help give his team a one-point advantage entering the second period and finished the game a perfect 10 of 10 from the free throw line.

Hunter Schlosser had 15 points for the Eagles, including 11 in the third quarter, and Thomas Trankler pitched in 10 points. 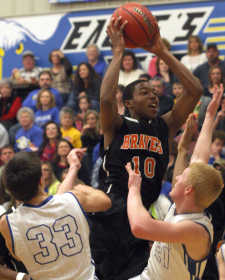 Oran was without the services of Chance Tenkhoff, who was hurt in the Eagles' contest against Bloomfield, a 74-49 win, on Tuesday.

"They're tough for us to match up with with our bigger lineup without Tenkhoff," Shoemaker said of the Braves. "We have to go a little bit bigger and we're slower. We really struggled to match up man. They're well coached and sound. They got the lead and they pulled it out and forced us to go man. We're kind of struggling to guard man with our lineup right now."

The loss breaks a six-game winning streak for the Eagles and drops them to 19-6 on the season with half those losses coming to the Braves.

Scott Central, currently ranked second in Class 1, moved to 16-4 and our the winners of eight straight.

With just a two-point leading going into the fourth the braves outscored the Eagles 17-8 in the final period to pull away.

Gerald Sanders had a game-high 18 points to lead Scott Central with Skylar Lemons and Eric Smith scoring 12 and 11 points.

For Oran, Jason Bennett had a team-high 14 points while Garrison Mangels and Max Priggel scored 13 points each.