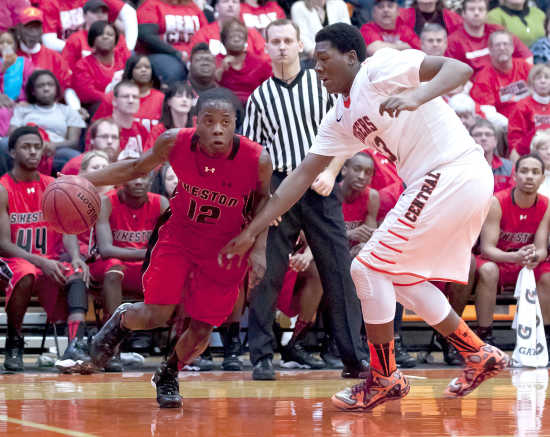 Sikeston's Dominique Dyes drives past Central's Andre Statam in the second half of the Bulldogs' 67-52 win over the Tigers Friday, Feb. 14, at Central High School in Cape Girardeau. (Adam Vogler, SEMO News Service)

CAPE GIRARDEAU -- Heading into Friday night, the race for the top seed in Class 4, District 1 appeared to be wide open among three teams: Cape Central, Notre Dame and Sikeston.

The picture has cleared up somewhat following Sikeston's 67-52 SEMO Conference win at Cape Central, marking the first time the Bulldogs have beaten the Tigers on their home floor since 2008.

"I thought we really played well in the second half," Sikeston coach Gregg Holifield said. "We sustained and did some good things. I thought our defense really improved in the second half and I thought we did a good job on the boards. I thought it was a total team effort. It's a difficult place to play. They're a very talented team and we know how hard they are to beat. It's great to go up there and get a win."

With the score tied 32-32 at halftime, Sikeston turned up the intensity level on defense in the second half, and on offense began taking the ball right at the teeth of the Tigers' defense.

"It's one of the most physical games I've seen," Cape Central coach Drew Church said. "We got in a lot of foul trouble. We had four guys with four fouls. We had to play a lot of the third quarter with two freshmen in and their inexperience kind of showed. They were able to get some points off turnovers."

With the Tigers trailing 41-38, Cox picked up his fourth foul with 3:35 left in the third quarter to send him to the bench. It resulted in a 9-2 run by the Bulldogs to close out the period to lead 50-40.

Cox returned in the fourth quarter and scored on consecutive baskets to trim the Bulldog lead to 50-44, but that was as close as the Tigers would get.

Sikeston all-state senior J.T. Jones hit a 3-pointer from the top of the key on the following possession. Cape Central got no closer than seven the rest of the way.

With the Tigers fouling on purpose in the final two minutes, the Bulldogs did not close out the game well from the charity stripe, only going 6 of 11 in the fourth quarter, but it proved to be more than enough for the win. The final margin marked Sikeston's biggest lead of the night. 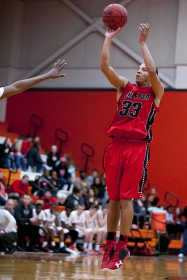 Sikeston's Reese Porter takes a shot in the second half of the Bulldogs' 67-52 win over the Central Tigers Friday, Feb. 14, at Central High School in Cape Girardeau. (Adam Vogler, SEMO News Service)

"Either we need to get more aggressive and get more fouls or we need to play a different way," Church said. "They shot 36 free throws and we shot 10. That's a huge margin and that's the difference in the game. Either we weren't aggressive enough or they really know how to play well and not use their hands."

The Tigers did not help themselves on offense as they turned the ball over 21 times against Sikeston's pressure defense while misfiring on all nine of their 3-point attempts.

By comparison, Sikeston only had nine turnovers and drained eight 3-pointers.

"They're a great team," Church said of the Bulldogs. "They played well. They play hard. Their press will get you going. They try to make you play fast and we kind of bit into that a little bit."

The entire first half was tight.

Sikeston led 5-0 to start the game only to see the Tigers respond with six straight points. There were five lead changes and two ties in the first quarter alone, but the Tigers took a 17-15 lead on an offensive putback by Statam to end the period.

The second quarter was similar with six ties and five lead changes, but a pattern was developing as the Tigers routinely sent the Bulldogs to the line on shooting fouls. Sikeston had 13 free throw attempts in the second quarter.

The Bulldogs' Zach Harrison hit a 3-pointer from the right corner to give Sikeston a 32-29 lead, but Cox tied the game on a conventional 3-point play with one second remaining in the half.

"They hurt us early in the game, we didn't do a good job of getting back and we had some foul difficulties," Holifield said.

With Jones in foul trouble for most of the first half, Sikeston was carried in the first half by sophomore guard Dominique Dyes, scoring 15 of his team-high 17 points before halftime.

"He gave us a great lift off the bench," Holifield said of Dyes. "He's one of those guys that is a good player. He's solid. He came in and had some open looks and knocked them down." 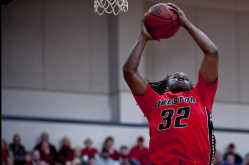 Sikeston's J. T. Jones brings down a rebound in the first half of the Bulldogs' 67-52 win over the Central Tigers Friday, Feb. 14, at Central High School in Cape Girardeau. (Adam Vogler, SEMO News Service)

Jones, who was held scoreless in the first half, scored 14 points in the second half to go with his eight rebounds, four assists, three steals and two blocks.

"Those guys went to work and our guards did a good job of pounding it in there," Holifield said. "That's a plus when you've got guys that look in there and feed the post. Our post guys were working and calling for the ball."

Holifield also noted the play of senior Marqese Parks, who drew a crucial momentum shifting charge against Cox in the third quarter, and then moments later drained a 3-pointer on kick-out from Jones to give the Bulldogs a nine-point lead.

"They have a complete team," Church said. "They have three or four guys that can shoot the ball. The Porter kid and Jones inside compliment each other well inside."

Sikeston controlled the boards against the bigger Tigers team, out-rebounding them 31-25.

Mikey Jones led Cape Central with 18 points, most coming off the back end of the Bulldog press. Cox finished with 16 points. Statam added nine.

The Tigers' inability to make perimeter shots allowed the Bulldogs to double-down on Cox and Statam in the paint.

"You've got guys that are collapsing like that," Church said. "We've got to be able to be strong and either make a quick move or find somebody cutting to the basket or kick it outside. I hope that we get the chance to see them again sometime."

With the win, Sikeston improves to 5-1 against district opponents, owing its only loss to Notre Dame, which they avenged a week later back in December.

Friday marked the Bulldogs' fourth straight win over Cape Central and their 11th victory in the last 13 meetings with the Tigers.

Sikeston's J.V. team improved to 13-2 on the season and 6-1 in the SEMO Conference with a 61-43 win over Cape Central's junior varsity.