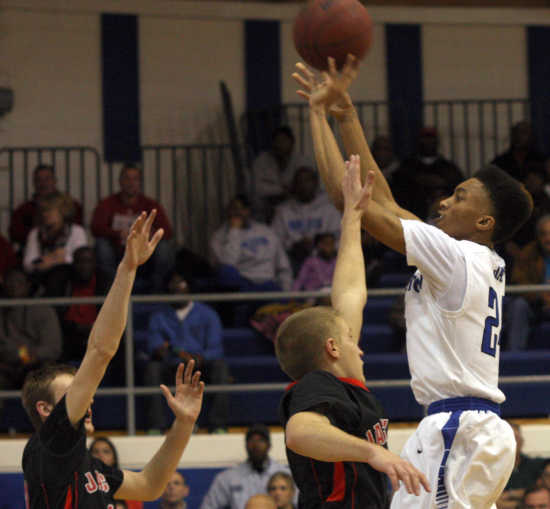 CHARLESTON -- Charleston's Delfincko Bogan has made a name for himself as being able to take over when the game is on the line.

But on Saturday afternoon in a pivotal SEMO Conference game against Jackson, he got some help from his teammates.

Bogan, his brother Robert Bogan and senior guard Mike Kellum combined to score all 22 of their team's fourth quarter points to rally the Bluejays to a 66-62 victory over the Indians at Charleston High School.

But Saturday's win over Jackson was the biggest hurdle to clear for Charleston.

"We knew going in it would be a tough game," Charleston coach Danny Farmer said. "We felt we could play with them. We wanted to stay close to them. I felt if we stayed close we could win it in the end."

Jackson (19-4, 7-1 SEMO) came into the game having not lost to a team in southeast Missouri, winning both the SEMO Conference Tournament and the seMissourian Christmas Tournament, but the Indians never faced off against Charleston in either tournament.

Saturday, which was a rescheduled game from a snow-out two weeks ago, was a chance for the Bluejays to show how much they have improved since those tournaments.

"There was a little chip on our shoulder," Robert Bogan said. "We had to fight through all the adversity. Coach Farmer was telling us that that we were either going to be No. 1 or No. 2 in the conference by the end of the week so we just wanted to play hard and try to make a statement."

Charleston, which has won 12 of its last 13 games, overcame a fourth quarter deficit, and none came up bigger down the stretch than Kellum, whose 3-pointer with 2:26 left in the game gave Charleston a 59-55 lead.

Kellum, who Delfincko Bogan said is "very underrated," scored eight of his 11 points in the final 2:26, hitting 5 of 6 from the free throw line to help ice the victory.

"Kellum came off the bench and did a super job for us," Farmer said. "That 3-pointer was big. In my mind it wasn't put away, but it gave us a little cushion. We needed a cushion because one point was not enough."

Just moments earlier, Jackson's Braden Wendel hit a 3-pointer to tie the score at 53-53 with 5:25 left in the game. Robert Bogan, who seldom shoots 3-pointers, answered with his own 3 on the ensuing trip to give the Bluejays a 56-53 lead. Jackson never could tie the game again.

"I don't shoot many 3-pointers -- I just play defense," Robert said. "But coach said shoot it so I did and I just prayed that it went in."

The shot by Robert capped a personal run of seven straight points for his team, which also led to Farmer's strategy of spreading the floor and going into a delay game in the final five minutes.

"We wanted to shorten the game a little bit and make them come out and have to guard us," Farmer said. "They were in that zone and had a little bit of success in it and we wanted to draw them out to us."

"When they hit those shots, we needed to come down and respond and I thought we executed," Jackson coach Darrin Scott said. "I thought we did a great job of getting what we wanted to offensively. Karson (King) had two really good looks with a 3 that went in and out and we got some other good looks that we just didn't finish. Those are plays that if we finish, it's a different ballgame, but that's basketball."

The Indians had to resort to fouling and hoping the Bluejays couldn't convert its free throws, but Charleston hit 7 of 8 to extend its lead to 66-55 with 49 seconds left.

Jackson didn't go quietly, responding with a 7-0 run within 24 seconds by forcing turnovers on the press to cut the lead to 66-62 on a King 3-pointer with 10 seconds left but that was as close as they would get. Robert Bogan was fouled with six seconds left and missed both free throws, but the Indians were out of time as Josh Daume's 3-point shot was off the mark as the horn sounded.

"Once it got to the end of the game Charleston is a lot smaller and they're a lot quicker than we are," Daume said. "We're not the slowest club but we have a couple of slower guys that can't stay in front of them and they just spread us out they got some easy buckets."

The Indians couldn't take advantage of a significant height advantage with the likes of 6-foot-8 senior Brandon Lueders, 6-7 junior Blake Reynolds and King, a 6-6 senior.

Charleston out-rebounded the Indians 26 to 24 in the game.

And the Bluejays' quickness harassed Jackson into 17 turnovers in the game, including 11 in the first half which helped Charleston build a nine-point lead in the second quarter.

"We got physical with the big guys and out front we wanted to put enough pressure on them so they would have a difficult time throwing it in," Farmer said. "You know, make them panic a little bit and make a bad pass and take that back door away."

The first quarter was tight with five lead changes and three ties with Charleston clinging to a 14-12 lead after one.

The Bluejays started the second quarter with seven straight points capped by a Delfincko Bogan 3-pointer to lead 21-12.

The Indians were able to turn the tide as they controlled the second quarter the rest of the way. King's 3-pointer with 15 seconds left gave Jackson a 28-25 lead but Charleston's Timontrell Horton scored inside just seconds later to cut the Indian lead to 28-27 by halftime.

"In the first half we definitely made some unforced turnovers -- we started playing too fast," Daume said. "I mean they applied good pressure but we just made turnovers that we shouldn't have made. Their pressure made us go faster to a certain extent. I think once we got more comfortable we knocked them down a little bit."

The third quarter was tight as well with neither team leading by more than four points. Jackson carried a 46-44 lead into the fourth quarter.

Charleston quickly seized control in the final frame with Delfincko scoring inside to tie the game. After two Reynolds free throws put the Indians ahead, Delfincko hit a 3-pointer and Robert picked up a loose ball knocked away by Shandor Webster and scored a fast-break layup to lead 51-48. Charleston never trailed again.

The Bluejays shot well from the perimeter, sinking 7 of 17 (41 percent) from 3-point range and they only had 11 turnovers.

Jackson was led by King's game-high 23 points with six rebounds, three blocks and three steals. Lueders had 14 points and Reynolds had 13 points and 11 rebounds.

Jackson will play at Class 5 No. 2 ranked CBC on Tuesday before returning home to host Kennett in its final SEMO Conference game on Friday.

But now they will be doing some scoreboard watching if they have hopes of claiming a part of a conference title.

"Coach told us all week this game decided our fate in the SEMO Conference," Daume said. "If you lose it you can't control whether you win the conference or not. It was a huge game for us."

Charleston can clinch at least a tie for the conference title with a home win over Cape Central on Tuesday. The Bluejays can clinch the title outright by beating Poplar Bluff on the road on Friday.

"This is a great win for our team," Delfincko said. "We knew they were going to be tough but we did what we had to do to win."