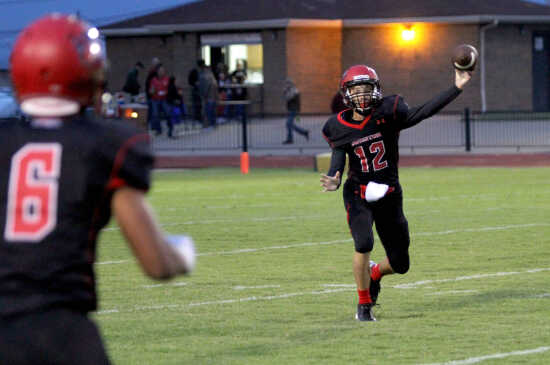 FARMINGTON -- The season started with promise.

A pair of lopsided victories over Charleston and New Madrid County Central gave the Sikeston Bulldogs reason to be excited.

But a loss to powerful Cape Central and a crushing last-minute defeat last week to Dexter has the season in a state of flux.

The Bulldogs are now at a crossroads and with a SEMO Conference North road test at Farmington tomorrow, it doesn't get any easier.

The Knights come into the game with an identical record as the Bulldogs at 2-2. The team has had its struggles the past couple years, going 3-7 two seasons ago and 1-9 last year.

But Farmington appears to be on the road to recovery. They snapped a nine-game losing streak with a 20-13 win over North County in Week 2. They followed that up with a 13-0 road victory over Poplar Bluff.

The Knights owe its two losses to undefeated Class 5 Ladue 46-7 in the season opener and then last week to Class 5, No. 3 state ranked Jackson 55-7.

Sikeston coach Kent Gibbs expects another tough contest against a Farmington team that his Bulldogs held off 21-14 last year.

"They're much improved this year," Gibbs said. "I certainly expect us to have our hands full. We just need a good week of practice, realize it's a conference game and realize where we are and try to get better."

The Knights are led by quarterback Brandt Busenbark, who has thrown for 570 yards this season, including a 16 of 23 passing game for 203 yards against Poplar Bluff.

"The quarterback's agile," Gibbs said. "He gets outside a little bit but mainly he likes to throw the ball. He'll run it with their counters and inside zone stuff. Offensively they're going to run their spread. They're really going to go tempo and try to get us out of our alignments to get us to go faster so we're not where we need to be."

Farmington employs its usual spread offense which has posed problems for the Bulldogs in the past.

"They're very similar to the style that Jackson plays," Gibbs said. "They're up-tempo, they're really going quick. They really like to throw the ball. They have a lot of different route combinations. They've got a lot of different formations and they do different things out of the formations, so it's not something you can kind of scout and say, 'here's what they're going to do.'"

The Knights' running back Brayden Bohn, a 5-foot-6, 150 pound senior, is the team's leading rusher. He hurt the Bulldogs last year with 63 yards on eight carries, including a 19-yard touchdown to give his team the first score of the game.

Farmington's offensive and defensive line is one of the biggest, strongest fronts the Bulldogs will see this season.

"They're really good up front on both sides of the ball," Gibbs said. "I think that's probably the biggest key with them. Defensively they're really flying around on defense and doing some different things that they haven't done in the past with some different looks. We're going to have a hard time with some of their coverages if we don't get good reads and we'll have a hard time blocking them if we don't pick up their blitzes and stunts that they have."

The Bulldogs' offense has struggled the past two weeks, scoring just 22 points after piling up 101 points in the first two games.

Quarterback Nathan Hampton has thrown for 272 yards, completing 24 of 54 passes with three touchdowns and two interceptions.

Corbyn Blissett has been the top target so far, catching six passes for 160 yards with a score.

Fobbs has also been the leader on the defensive side of the ball with 46 tackles, seven tackles for loss and two quarterback sacks.

Shane Garrett follows up with 23 tackles and three tackles for loss.

The Bulldogs will be without sophomore Phayzun Fobbs, a contributor on both sides of the ball, with a concussion and a knee injury. He is out indefinitely and is still being evaluated.

Sophomore defensive back and backup quarterback Deonundre Johnson is questionable for the game after suffering a knee injury in a junior varsity contest on Monday.

"It's an opportunity for somebody else to step in and make plays," Gibbs said. "That's the way we've always approached it and will continue to approach it."

The Bulldogs have forced 11 turnovers, including one for a score this season.

Sikeston has won four of the last five matchups with Farmington and leads the all-time series 20-15-1.

Gibbs said bouncing back from a devastating loss such as the one they suffered last week against Dexter is tough to do.

But he said he and his staff have reminded the team of the positives they have.

"Our theme for the week is 'we are blessed,'" Gibbs said. "What that means is this: we've got a good program. We've got good kids in our program. We've got coaches that work hard for the kids. We've got great support in the community in the things that people do for us. We've got things to be thankful for, we just have to go out and perform and be consistent in what we do."