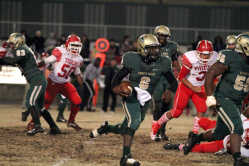 Riley hit senior wide receiver Parker McCormick for a 35-yard touchdown with 9:45 remaining in the first quarter to open the scoring. Cortez Dobbins added the two-point conversion to give Malden a 8-0 lead.

Riley then hit senior Jeremy Jones for a 23-yard touchdown and added the conversion when he found Nick Thompson for the 16-0 lead with 2:56 left in the first quarter.

After a 15-yard run from senior running back Dremond Robinson, Malden held a 22-0 lead early in the second quarter. Cardinal Ritter drove down the field, but what looked like a touchdown ended up being a fumble at the one-yard line and recovered by the Green Wave.

The Green Wave recovered a fumble on the next offensive play from Cardinal Ritter and wasted no time making the Lions pay as Riley hit Robinson for a 45-yard touchdown pass to give Malden a 34-0 halftime lead.

The second half was just like the first as Malden scored on their first possession on a 4-yard run from Robinson. Riley's point-after kick gave the Green Wave a 41-0 lead.

Riley then hit Robinson on a 73-yard touchdown pass to put Malden ahead 47-0.

Cardinal Ritter (6-7) added a touchdown with 1:45 remaining to end the shutout.