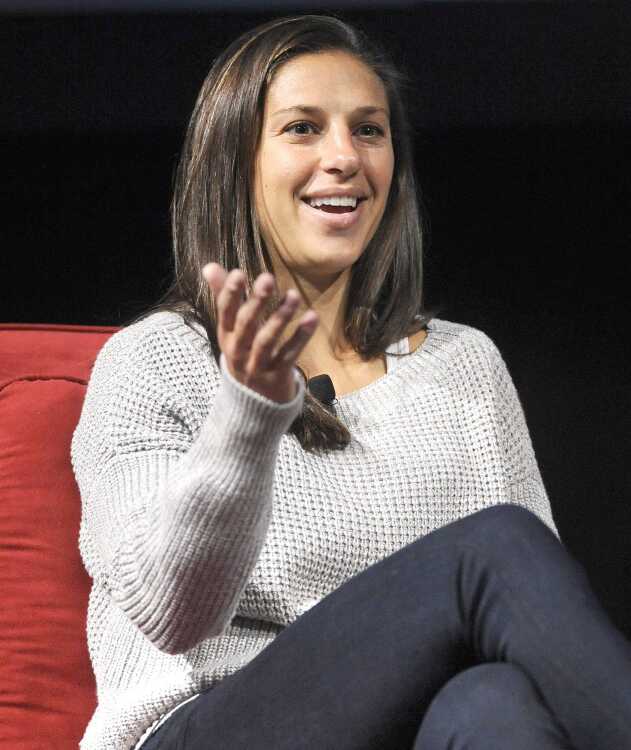 CAPE GIRARDEAU - Carli Lloyd, a midfielder for the U.S. women's national soccer team, was welcomed to the Show Me Center with a standing ovation Monday evening before giving a presentation as part of Southeast Missouri State University's Speaker Series.

A two-time Olympic gold medalist, Lloyd, who plays for the Houston Dash in the National Women's Soccer League, holds the unique distinction of scoring the game-winning goals in the finals at the 2008 Games in Beijing and the 2012 Games in London. She represented the United States at the past three Women's World Cup tournaments.

At the 2015 Women's World Cup, Lloyd led the U.S. team in record-setting fashion, bringing the World Cup back to the United States for the first time since 1999.

During the final match against Japan, Lloyd capped a hat trick in the first 16 minutes of the game. Her third and final goal of the game was widely described as one of the greatest shots of all time.

"Those 16 minutes were really 13 years of training when no one was watching," Lloyd told the audience Monday. "There's a lot of things that people don't see that's happening. They see the goals, and they see me on TV. But it's been a grind. It's been blood, sweat, tears, every day. It's been at the fields on Christmas morning, on Thanksgiving, on Easter. You name it, I'm out there doing something. And if I'm not doing something and it's an off day, I'm still thinking about the game."

For her performance, she received the Golden Ball Trophy, awarded to the best player, and the Silver Boot for her six tournament goals and one assist.

Lloyd, 33, was raised in Delran, New Jersey, and attended Rutgers University, where she set records as the Scarlet Knights' all-time leader in points, goals and shots. In 2013, she was inducted into the Rutgers Hall of Distinguished Alumni.

She has played in more than 200 matches for the U.S. national team and has scored 67 goals.

While physical training is important, Lloyd also stressed the importance of mental preparation.

"It's really everything," she said. "There's so many players that go to waste because, mentally, they aren't tough, and they can't overcome certain things."

Lloyd said she's learned how to adapt to a professional level, as well as how to handle when a coach tells her something she doesn't want to hear.

"I've had to learn that you have to control what you can control," she said. "There's so many things that are really out of your control."

She gave advice that people should strive to improve themselves but should not compare themselves to others.

"You are different from the person next to you. Everybody brings something unique," she said. "There's so many unique personalities on my team that I can't possibly compare myself to them, because that's what makes our team great. We're all different; we all bring something unique. And if you want to help your team, you have to focus on yourself. That's how you're going to make yourself better and ultimately make your team better."

Lloyd said her life has changed completely since winning the World Cup in July. As for the future, she plans to continue competing until the 2020 Olympics, she said, and then will retire and start a family at age 38.