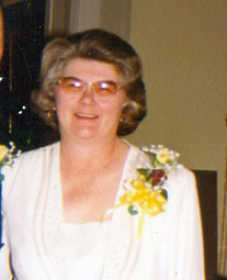 Ann Catherine (Hulshof) Schwendemann was born January 7, 1948 in Cape Girardeau to Herman Hulshof and Stella (Durbin) Hulshof. She died Tuesday, March 22, 2016 at Sikeston Convalescent Center at the age of 68 years, 2 months and 15 days.

Ann was united in marriage to Robert Joseph Schwendemann on August 24, 1968 in Portageville. He preceded her in death October 16, 2001. Also preceding her in death were her parents, Herman and Stella; her sisters, Agnes Hulshof and Mary Ellen Trenery; and her brothers, Edward, Stephen and Louis Hulshof.

Ann was a faithful member of St. Eustachius Catholic Church where she served on Ladies of Sodality. She started her career at McCrate Equipment as a bookkeeper, but her ultimate job was giving her tender love to her children and grandchildren. Mrs. Ann loved anything to do with the outdoors, especially when it came to helping her boys with the farm.

Contributions may be made in Ann's memory to Birthright.

Please send condolences to the family online at www.delislefuneralhome.net