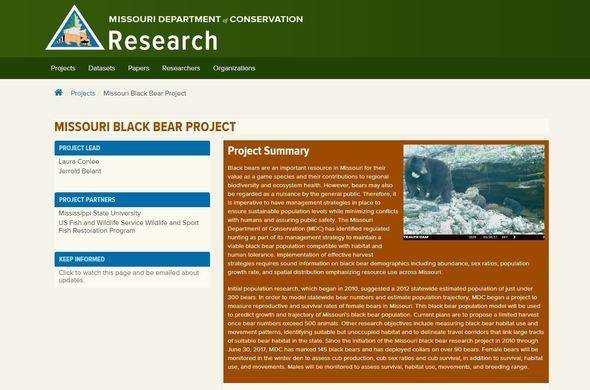 One of many new web features on the black bear research website will be an interactive story map. Story maps combine maps and geography with narrative text, images, and multimedia content to better share the story about black bears in Missouri. The black bear story map will launch this spring on the website.

“The story map will also show website users interesting black bear movements, such as, how far a bear can disperse, and maps of our collared bears,” said Laura Conlee, MDC furbearer biologist.

The new enhanced story map will replace the old tracking map previously on the website. While the new technology still provides interactive research maps of bear movements in Missouri, it limits individual collared bear locations to protect against illegal poaching.

“MDC conservation agents expressed growing concern over the potential for making it easier for someone interested in illegal wildlife trafficking to find a bear by looking on a website,” Conlee said. “Also, as Missouri’s black bear population grows and approaches the possibility of a hunting season, it was an ideal time to make changes to the maps while at the same time improving the interactive experience for people to learn more about black bears.”

MDC’s Conservation Commission has established a benchmark of 500 black bears before MDC initiates a hunting season. Missouri currently has an estimated black bear population of 350 bears. Conlee stated she is still collecting data to determine when the benchmark might be reached and will be posting ongoing research updates to the new bear research webpage.