Richland students get lesson in covering the president 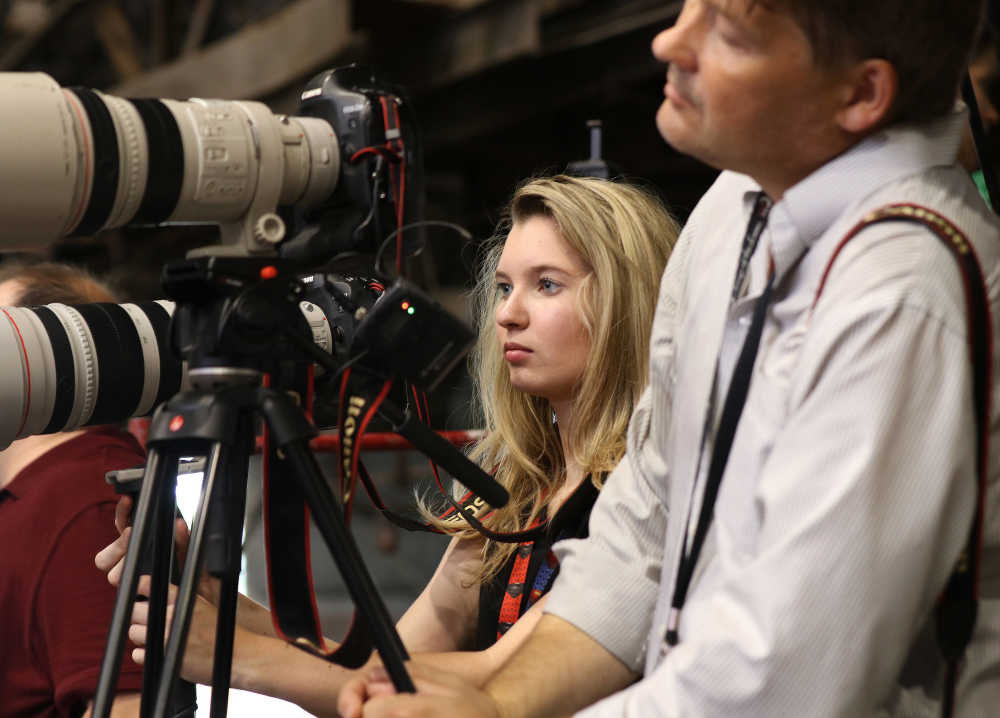 The students were chosen to attend Trump’s visit to U.S. Steel Granite City Works in Granite City, Ill., Thursday as members of the media through an application process.

“The more experience they can get, the more they learn,” Carter said of his students. “It was really cool to watch them learn from others.”

The students were picking the brains of other media members, Carter said, by asking how to do things, processes and what they would do in certain situations.

“Any time we do something like this, it makes the staff better,” Carter said. “We are not the type to just sit somewhere if we get in and be quiet. We are going to learn.”

Jones learned first hand the media world can be cut throat at times when securing the perfect spot for photographs and video. She described the area for the media as “small with no room to move” and first-come, first-serve on the spot. This did not stop some from stepping in front of the girls and blocking their shots.

“I learned you definitely need to be prepared for anything,” Jones said. “It was a taxing event, but wonderful.”

The group was taken to the factory on a shuttle along with other members of the media. Timelines were given instructing not to arrive before 11:30 a.m. and the last shuttle would be released at 1:45 p.m. Trump was scheduled to take the stage at 2:30 p.m., but did not do so until 3 p.m. Once inside, no one could leave until the president exited the stage.

Jones said inside the factory was hot because there was no air conditioning, not enough water, no food and she made a note to not wear high heels to an event of this type again.

As far as cameras and gear, Jones said she, King and Carter were prepared with every size lens needed to take photographs.

Once Trump took the stage, Jones said the experience was “surreal.”

“I was shaking when he came out,” she said. “A significant part of the population will not get to see the President of the United States standing in the flesh right in front of them.”

She described Trump as the same as she seen on television and in the media.

After receiving the approval to attend the event, Carter said he shared with his yearbook editors what to expect in regards to security. The invitation also included details of the lighting set-up in the room, suggested camera settings to adapt and why the lighting and stage were in the locations chosen.

Jones said they even had to be careful about what they said while attending the event.

In the photography world, many use the phrase “shoot” when taking photos. This phrase was not allowed during the president’s visit.

“If you said you are going to shoot the president, it’s not going to end up well,” Jones said.

According to Carter, Trump was very well received at the factory filled with thousands of U.S. Steel employees, members of the Granite City community and local officials.

Everyone in attendance stood the entire time in excitement, he said, adding many officials credited Trump’s steel and aluminum tariff’s for allowing the facility to re-open.

“Everyone in attendance was insanely grateful of Trump,” Carter said. “They appreciate what he did for the town and steel mill.”

Something Carter took notice of was Trump’s daughter and advisor, Ivanka Trump, and the way she mingled with the audience.

“It was really cool because you rarely see family break secret service tradition and she did,” he said. “She was taking selfies with the audience.”

Carter’s students have experienced many opportunities that some adults never have the chance to do. Students have photographed a St. Louis Cardinals game alongside their photography staff and helped create baseball cards for a minor league team, but this was the first presidential visit.

“It was a wonderful experience,” Jones said. “I don’t think anything I do will top that.”