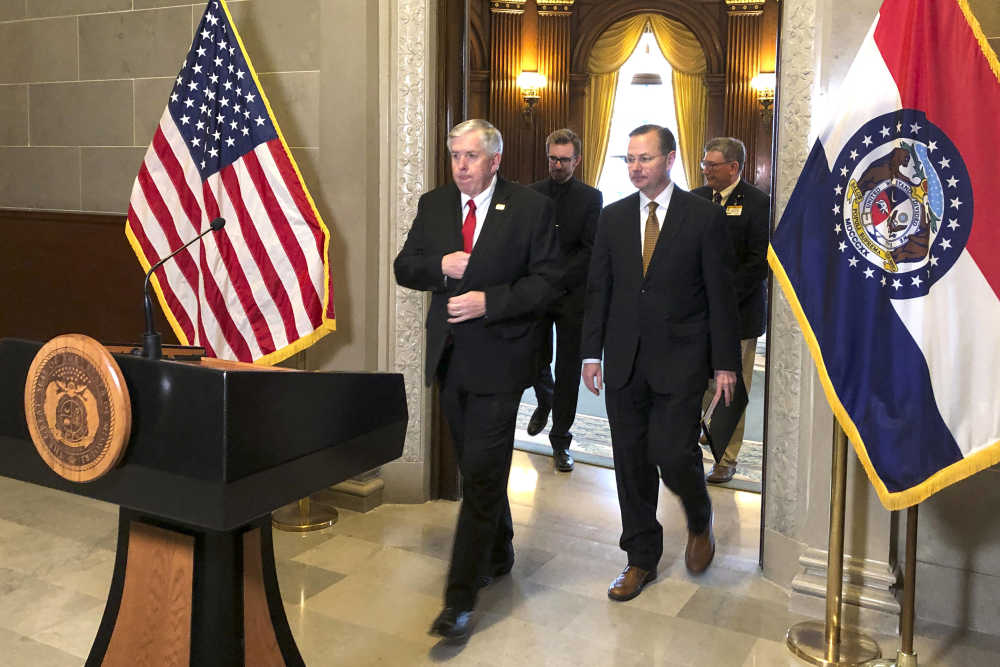 Columbia Mayor Brian Treece said the case was travel-related and that the individual is the same person who tested positive for COVID-19 Tuesday in Boone County. Treece previously said that individual was in their 60s, the Columbia Daily Tribune reported.

Treece on Wednesday said the person's family placed a 911 call Wednesday morning, and the person was transported to University Hospital in Columbia, where the patient died. Six emergency responders who were involved in the case are being quarantined in Boone County, he said.

"This is serious," said Dr. Stevan Whitt, chief medical officer of MU Health Care. "This is reinforcement that COVID-19 is really here, and we really need to do our part in taking care of our sick and needy people."

Concerns about the coronavirus have prompted Missouri's governor to push back local elections for two months, forced the closure of one of the state's most iconic landmarks, and led state lawmakers to scramble to make sure the state has enough money to respond.

For most people, the new coronavirus causes only mild or moderate symptoms, such as fever and cough. For some, especially older adults and people with existing health problems, it can cause more severe illness, including pneumonia.

Seventeen cases have now been confirmed in Missouri. One of the new cases involved someone who went to work in St. Louis even while exhibiting symptoms, Mayor Lyda Krewson said on Twitter.

"With this case, there's reason to believe there is community exposure," Krewson said. She urged anyone with cold- or flu-like symptoms to stay home and contact a medical professional.

Another of the new cases announced Tuesday was a Jackson County man in his 40s who recently traveled abroad. The man is doing well and is in isolation at home, while his family is in self-quarantine, county health officials said.

Children's Mercy hospital announced in a tweet Wednesday that a patient treated in the downtown Kansas City hospital's emergency room on Sunday had tested positive for the virus and would be self-quarantined at home.

The vast majority of people recover from the new virus. According to the World Health Organization, people with mild illness recover in about two weeks, while those with more severe illness may take three to six weeks to recover.

Missouri lawmakers on Wednesday gave initial approval to a bill that would allow Parson's administration to spend as much as $33 million in federal dollars on the response to the virus, if the federal government provides that much to the state.

Combined with $7 million in state dollars that Parson freed up by declaring a state of emergency, that could give the state as much as $40 million to use through the end of June, when the current state fiscal year ends.

House Democrats called for even more spending to cope with the pandemic, but the Republican-led House shot down Democratic amendments that would have pumped as much as $87 million more into the state's coronavirus response.

"$30 million is not a lot of money for a global pandemic, and you know it. You know it," Democratic Rep. Greg Razer told colleagues on the House floor. "Do better for the people of Missouri."

Also Wednesday, Parson ordered all local elections scheduled for April 7 to be postponed until June 2. The executive order allows already printed ballots to be used for the rescheduled elections. Residents who turn 18 by April 7 will be allowed to vote.

The Gateway Arch, along with its museum, sprawling grounds and the historic Old Courthouse, were closed Wednesday until further notice, the National Park Service announced.

The economic fallout from the virus is starting to take a toll on media. The Riverfront Times, an alternative newspaper in St. Louis, stopped printing its weekly publication and laid off most of its editorial staff on Wednesday.

Editor Doyle Murphy told the St. Louis Post-Dispatch that the newspaper will continue as a website run by himself and web editor Jaime Lees. He said it wasn't clear when or if the print edition would resume.

The Riverfront Times has been hit especially hard because it focuses on bars and restaurants that are now closed and concerts and events that are canceled or postponed.

The Associated Press receives support for health and science coverage from the Howard Hughes Medical Institute's Department of Science Education. The AP is solely responsible for all content.