Missouri virus cases up to 90, including 5 tied to preschool 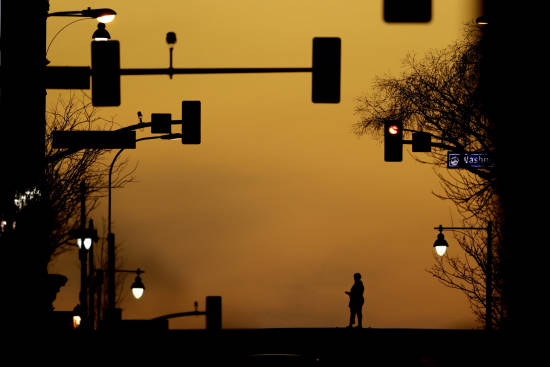 A person rides a hoverboard on a downtown street in Kansas City, Mo. Saturday, March 21, 2020. Officials in Missouri's largest cities are ordering a mandatory stay-at-home rule to residents starting next week in an effort to slow the spread of the coronavirus. St. Louis and St. Louis County authorities first announced the order, which is to begin Monday, before Kansas City officials followed later Saturday with a similar order. The order in Kansas City and surrounding areas is set to begin Tuesday. (AP Photo/Charlie Riedel)

O'FALLON, Mo. (AP) — The number of confirmed coronavirus cases in Missouri rose to 90 Sunday, including at least five cases tied to one suburban St. Louis preschool.

The number of confirmed cases of COVID-19, the disease caused by the virus, is up from 75 on Saturday, according to the state health department. Three people have died in Missouri, one each in Boone, Jackson and St. Louis counties.

At least five cases are tied to Temple Israel's preschool in Creve Coeur. The synagogue said in a statement late Saturday that a total of four teachers have now tested positive for COVID-19. A parent of a child at the preschool has also tested positive.

All five are either recovering at home or are no longer symptomatic, according to the synagogue.

The synagogue noted that the parent attended Temple Israel's Purim Carnival on March 8. The event celebrates the saving of the Jews from a threatened massacre in ancient Persia.

The synagogue closed its schools for the remainder of the academic year, which was scheduled to end May 15.

Anheuser-Busch employees will be making hand sanitizer in addition to Budweiser, Bud Light and other beers. The company said on Twitter that it will use its supply and logistics network to begin producing and distributing bottles of sanitizer "to accommodate the growing needs across the United States."

The St. Louis Blues said a relative of a team employee tested positive and is in isolation with family. The hockey team said all Blues staff who may have had contact with the employee have been notified.

"As a result of this positive case, all members of the Blues, as previously directed, are requested to remain isolated, to monitor their health and to seek advice from our team's medical staff," the team statement read.

A state representative with the virus, Democrat Joe Runions of Grandview, said in a statement that his condition is improving but progress is slow. He also said his doctors are "deeply concerned" about the potential shortage of supplies.

"Although I remain hospitalized, I am getting better, but it will be a long recovery," Runions said. "The most important thing to me right now is for the doctors, nurses and hospitals in our state to get all of the support and supplies they need as they work to treat this illness."

St. Louis and St. Louis County will be under mandatory stay-at-home orders, effective Monday, and a similar order in the Kansas City area starts Tuesday. Illinois, New York and California are implementing statewide stay-at-home orders, calling on residents to remain in their homes unless they have vital reasons to go out.

The Associated Press receives support for health and science coverage from the Howard Hughes Medical Institute's Department of Science Education. The AP is solely responsible for all content.