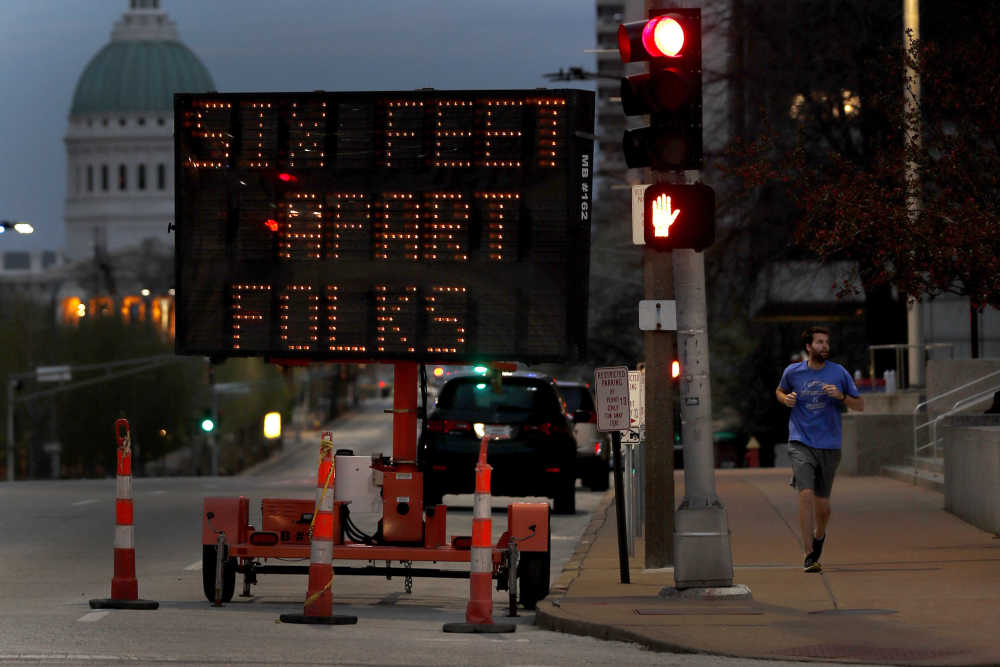 A person jogs past a sign encouraging social distancing Thursday, April 2, 2020, in St. Louis. The city is under a stay-at-home order, with a few exceptions such as exercise, in an effort to slow the spread of the coronavirus. (AP Photo/Jeff Roberson)

The Republican governor's order came as the number of confirmed coronavirus cases in Missouri reached 2,113, up 279, or 15%, from Thursday. The number of infections has increased more than eight-fold in the past 10 days. Nineteen people have died of COVID-19, the illness caused by the virus.

The majority of Missouri residents were already living under stay-at-home orders issued by local leaders, including most of the St. Louis and Kansas City areas, Springfield, Columbia and many other places. The statewide order is to take effect Monday, Parson said.

But advocates of a statewide order contended the hodgepodge of local orders created confusion and raised the risk of spreading infection. Many medical leaders and politicians have urged Parson to require all Missourians to stay at home.

Parson issued an order on March 23 prohibiting gatherings of more than 10 people, and has repeatedly urged people to be responsible. But he previously cited the low number of cases in many counties, especially rural counties, as the reason for declining to issue a statewide stay-at-home mandate.

More than 70% of confirmed Missouri cases are in the St. Louis and Kansas City areas, but cases in smaller counties are starting to rise.

Missouri's order means that only a handful of states, mostly in the Midwest and South, have not issued stay-at-home orders. More than 90% of the nation's residents are now living under such orders as part of efforts to ease the pandemic that has sickened more than 266,000 people in the U.S. and killed nearly 7,000.

The county also announced it was closing all parks out of concerns that people were congregating in large numbers.

"With warmer weather, our parks are becoming more and more crowded," St. Louis County Parks Director Tom Ott said in a statement. "During this health crisis, we cannot allow large groups of people to be together in one place."