Sikeston man sentenced to life for shooting at state trooper 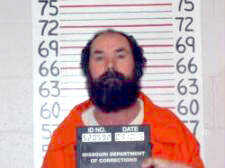 CAPE GIRARDEAU, Mo. — A Sikeston man was sentenced to life in prison for shooting at a law enforcement officer

According to New Madrid County Prosecuting Attorney Andrew Lawson, because Maddox is a dangerous felon he will have to serve 85 percent of his life (or 30 year) sentence.

“That means that Larry Maddox will be 75 years old before he will be eligible for parole, Lawson added.

According to the probable cause statement by Highway Patrol Sgt. J.S. Stoelting, at 9:51 p.m. June 2, 2019, in New Madrid County, two highway patrol officers stopped to assist what they believed to be a stranded motorist. As one of the officers approached the truck he observed a man, later identified as Maddox, lean into the passenger side door of the vehicle. The man then produced a pistol and began firing at the patrolman.

When interviewed by officers at the hospital, Maddox stated he had used methamphetamine earlier in the day. “Maddox refused to give details of why he shot (at the officer). His only statement was that he made a mistake,” Stoelting wrote.

Also Stoelting noted in the probable cause statement that a hand gun was found next to Maddox after he was shot as well as two loaded magazines for the gun on the bumper of the disabled truck.

This is the last remaining case from a violent stretch in which police officers were victims in violent crimes in New Madrid County, the prosecutor stated. He noted in an earlier trial, Demarcus Owens was found guilty and received a life plus 15 year sentence for first degree assault of a law enforcement officer, two counts of armed criminal action and resisting arrest. Maddox was with Owens earlier June 2, 2019.