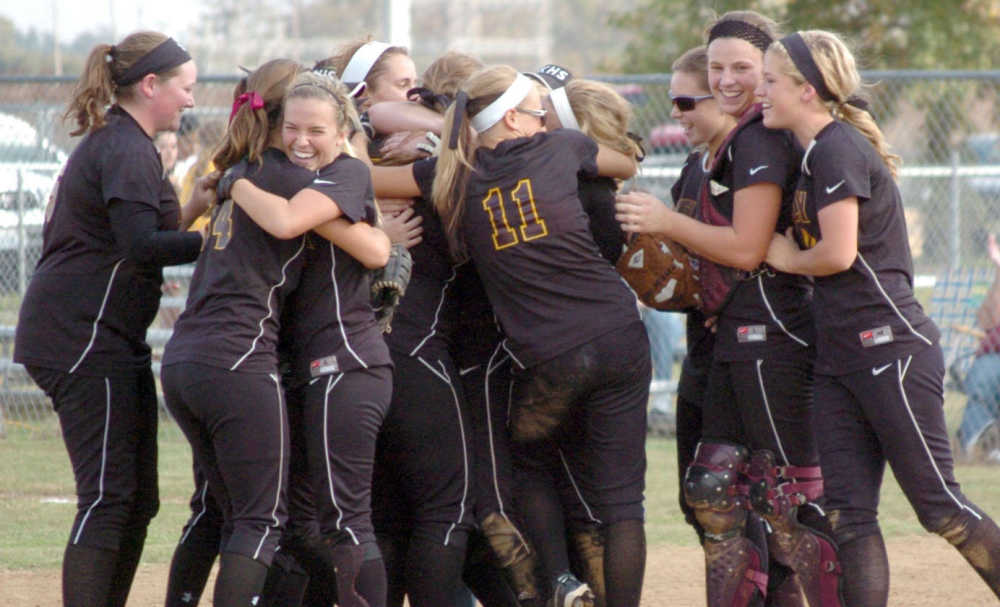 Kelly players celebrate after recording the final out Saturday in a 13-0 win over Hartville in the Class 2 quarterfinals at Kelly High School. (Photo by Brent Shipman, Staff)

BENTON -- For the second straight game everything seemed to click for the Kelly Lady Hawks and the result is another trip to the Class 2 final four in Springfield.

Combining stellar pitching performances from Alexis Dock and Kristi Brucker with a 13-hit effort at the plate, the Lady Hawks were able to take down visiting Hartville 13-0 in five inning on the mercy-rule Saturday at Kelly High School.

"I've had people ask me does it ever get old and it never does because it's a new team with new girls," Kelly head coach Rhonda Ratledge said of making the final four for the 10th time in her career. "To have a lineup with all those freshman and sophomores in it is exciting.

"Hopefully getting them to the final four with as young as they are will give them a taste and they can see exactly what we've been talking about and preaching about."

Playing as the visitors in the quarterfinal match-up, the Lady Hawks (22-4) wasted little time in scoring the go-ahead run in the top of the first before rallying for another four runs in the second.

It was after Sydney Vinyard started the rally with an RBI-double that lead-off hitter Samantha Ratledge broke things open with a three-run home run that cleared the fence in deep center field.

"That really set the mood," Rhonda Ratledge said. "I think that is what really kind of shook Hartville up there. Their side of the field got a little quieter."

With the Lady Eagles (19-6) still hitless, Kelly went on to add another run on the top of third before coming up for their biggest rally of the afternoon.

Kick-started by a single from Morgan LeDure to drive in McKynlee Neumeyer, the Lady Hawks took advantage of a couple of Hartville errors to plate another three runs.

Both Samantha Ratledge and LeDure came home on an infield error that put Kelly up 10-0 to put the mercy rule in effect. One final run came in during the frame when Dock scored from third on a passed ball.

Capping the night, LeDure drove in a pair of runs with a single in the fifth before Brucker retired the Lady Eagles in order to end the game.

"Last year we didn't make it to state so I'm really excited," Samantha Ratledge said. "It will be my first year up there. We were nervous because we haven't played them in two years.

"We just wanted to come out here and whip some butt."

After coming in to relieve Brucker in Tuesday's Sectional game against Twin Rivers, Dock reversed roles with her co-ace for Saturday's contest.

Coming in after a perfect outing against the Lady Royals, Dock allowed only one hit in four innings while issuing two walks and striking out nine.

She retired six straight to start the game before two walks and a single allowed Hartville to load the bases in the fifth. Unfazed, the young freshman got the final out in a strikeout to end the threat.

"It definitely was (intimidating)," Dock said. "We were nervous, but were definitely ready.

"I got a little frustrated when I walked those two batters. But I just had to gain my composure back and keep going."

On his team's struggles against Dock, Hartville head coach Rodney Cravens said, "For whatever reason today she was up in the zone, we didn't lay off and she got us to chase."

Following one more inning from Dock, Brucker started the fifth and retired the side in order on a ground ball and a pair of pop ups.

Both pitchers were backed by a flawless performance from the Lady Hawks' defense.

"Dock did an excellent job and then so did Brucker," Rhonda Ratledge said. "(Brucker) pulled us out in the district tournament too. She was a good closer there so she's done an excellent job closing for us.

"I want that confidence in her because I'm sure we'll rely on her at state again."

Leading Kelly's effort at the plate was LeDure, who went 3 for 3 and drove in three runs. Samantha Ratledge was 2 for 4 with the above mentioned home run.

Jade Rampley, Brucker and Vinyard had two hits each with all three girls contributing a double.

"The girls all the way up and down the lineup (hit well)," Rhonda Ratledge said. "Even the freshman I have in the ninth spot, (Neumeyer) she's my designated player and all she does it hit.

"She gets in there, focuses and got walked all three times. That takes a lot from a freshman to stay focused and watch those pitches."

Back in the semifinals for the first time since 2010, Kelly will travel to Springfield this weekend where they'll open the Class 2 state semifinals against Brookefield (25-5) on Friday at 11 a.m. at the Killian Softball Complex.