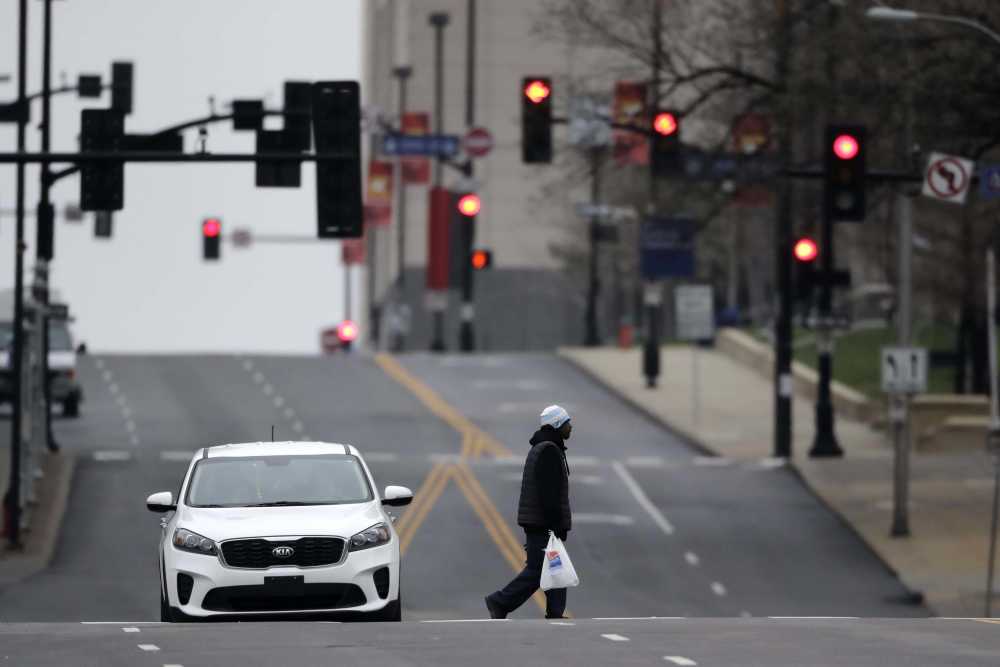 A man carries a bag of groceries through downtown Kansas City, Mo. Sunday, March 22, 2020. Officials in Missouri's largest cities are ordering a mandatory stay-at-home rule to residents starting next week in an effort to slow the spread of the coronavirus. St. Louis and St. Louis County authorities first announced the order, which is to begin Monday, before Kansas City officials followed later Saturday with a similar order. The order in Kansas City and surrounding areas is set to begin Tuesday.
AP Photo/Charlie Riedel

ST. LOUIS (AP) — Residents of Missouri's biggest cities have been ordered to stay home to help slow the spread of the coronavirus, which sickened nearly 130 people statewide, including at least five people linked to a suburban St. Louis preschool.

The shelter-in-place order in St. Louis took effect Monday, a day before such orders were set to be enforced in the Kansas City and St. Joseph areas. The orders call for residents to remain in their homes unless they have a vital reason to go out, such as to go to the grocery store or pharmacy.

COVID-19, the disease caused by the virus, had sickened 128 Missouri residents as of Sunday, which was up from 75 on Saturday. Three people have died.

Four teachers and the parent of a student at a preschool in the St. Louis suburb of Creve Couer were among the latest to catch the disease. There also was evidence in St. Louis County of "community-spread," in which it's not clear how an infected person contracted the virus and its origin can't be traced.

"In an epidemic we are generally making decisions two (weeks) behind (given the incubation period)," he tweeted Saturday. "By this time in about 7-10 days COVID will be endemic and our hospitals will start to fill. Act right now!"

Efforts to keep the public safe proved challenging. The Kansas City International Airport said in a Facebook post that several hand sanitizer dispensers had been ripped off the wall in restrooms and that it won't be able to purchase replacements for months.

"Acts like this impact many people," the post said. We are doing all we can to protect the health of our customers. This act makes that difficult since this is the only way we can offer hand sanitizer since it is in dispenser bags, and bottled sanitizer is not available."