Woman in her 30s from St. Louis dies from coronavirus 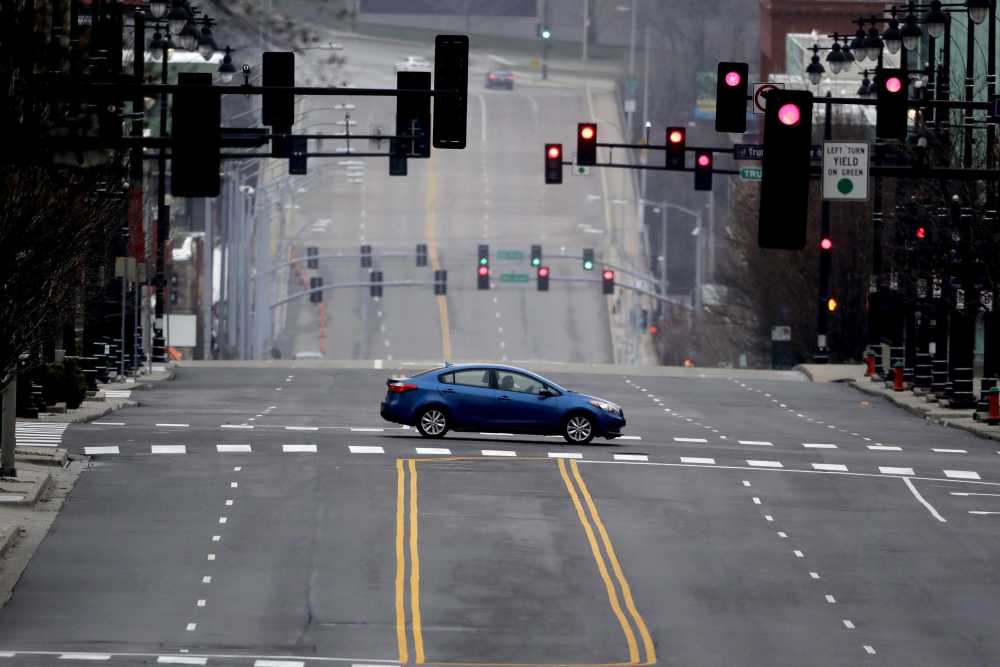 A motorist crosses an empty downtown street in Kansas City, Mo. Sunday, March 22, 2020. Officials in Missouri's largest cities are ordering a mandatory stay-at-home rule to residents starting next week in an effort to slow the spread of the coronavirus. St. Louis and St. Louis County authorities first announced the order, which is to begin Monday, before Kansas City officials followed later Saturday with a similar order. The order in Kansas City and surrounding areas is set to begin Tuesday.
AP Photo/Charlie Riedel

O'FALLON, Mo. (AP) — A St. Louis woman in her 30s died from COVID-19, and officials said Monday that they are still trying to figure out how she got the disease caused by the coronavirus.

The death was the fourth in Missouri from COVID-19, and her relative youth "is a cause for concern for us," Dr. Fredrick Echols, the city's health director, said at a news conference. He said the woman was hospitalized on Sunday, though he declined to provide further personal details about her.

The woman hadn't recently traveled and health officials were still trying to determine how she got the disease, though Echols said it was too early to consider it a case of community spread, in which it's not clear how an infected person contracted the virus and its origin can't be traced.

The announcement came hours before a stay-at-home edict was to take effect for the combined 1.3 million residents of St. Louis city and county.

"This should be a wake-up call for all of us, particularly anyone who may still question whether or not this is a real thing," Mayor Lyda Krewson said at the news conference.

Similar stay-at-home orders were set to take effect Tuesday in the Kansas City and St. Joseph areas. Kansas City officials said enforcement of the order won't be heavy-handed, unless it proves necessary.

"We will not be stopping people to ask for papers if you are going to work or stopping cars and asking where they are going and how you are getting there. We are asking people to have civic responsibility and not depend only on enforcement," said Kansas City's police chief, Rick Smith. He said traffic violators will face a good chance of being pulled over because police "don't want it to become a free-for-all out there."

Another large Missouri county also announced stay-at-home orders. The order in Jefferson County, part of the St. Louis metropolitan area, was to take effect at midnight on Monday and last through April 23.

Statewide, Republican Gov. Mike Parson banned gatherings of more than 10, but he has declined to require people to stay at home despite pressure from some medical leaders.

Missouri's health department on Monday said 183 people have confirmed cases of the virus, up from 106 a day earlier. The state's other three COVID-19 deaths were reported last week in Boone, Jackson and St. Louis counties.

Among the new cases were four at an assisted-living center in Springfield. The city's health director, Clay Goddard, said residents and staff are being monitored to watch for potential additional cases.

Goddard had a simple message for those who want to help: Don't go out.

"It's going to sound very counter-intuitive to you as a citizen, but as much as possible we need everyone to do nothing right now," Goddard said at a news conference. "That means you stay at home."

Kansas City's school district announced that one of its staff members contracted the disease. The district extended school closures through April 24.

"This is an unprecedented situation," Superintendent Mark Bedell said in a statement.

Efforts to keep the public safe proved challenging. The Kansas City International Airport said several hand sanitizer dispensers had been ripped off the wall in restrooms and that it won't be able to purchase replacements for months.