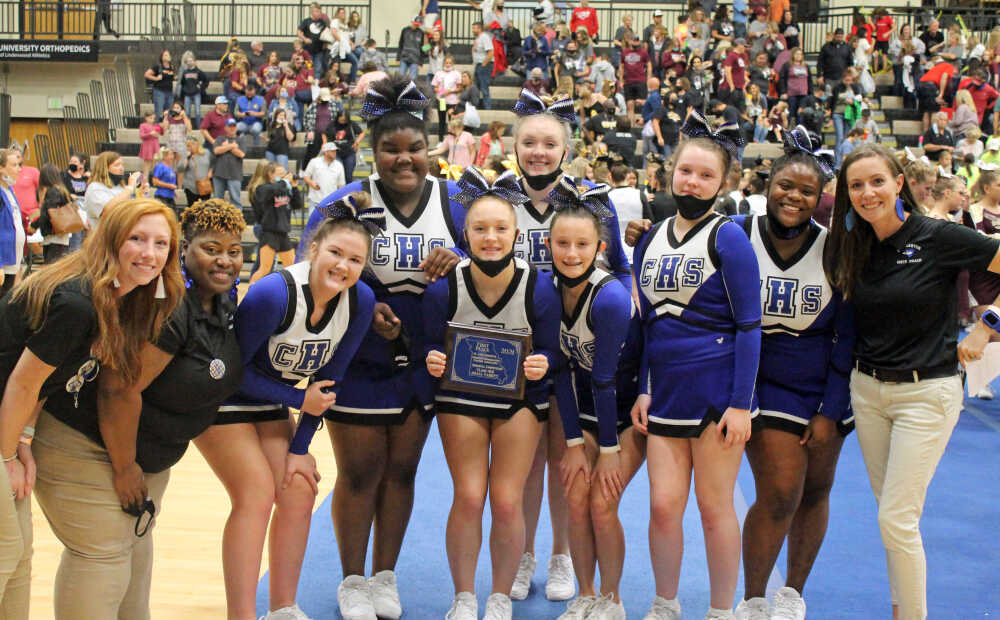 CHARLESTON, Mo. — On Oct. 2, the Charleston High School Cheerleaders entered the St. Louis Regional Cheer Competition with hope and determination and walked away with a first place victory in the Class 1 small division and earned their spot in the state competition later this month.

“We were going to be happy if we just got in the top five and got the opportunity to go to State,” said CHS Cheer Captain LaVada Brown, a junior. “But all of our hard work and dedication paid off in the end.”

The win would be quite an accomplishment in a normal year, but this year it is even sweeter. On top of the increased pandemic precautions, the team is now smaller, younger and less experienced than in previous years. From any point of view, this could have been considered a rebuilding year.

The squad managed to beat out seven other Class 1 small division teams, and head coach Megan Williams says this is because of their determination and hard work.

“I am so proud of this little team,” said Williams. “What they lack in experience, they make up for with their drive.”

Williams, once a CHS cheerleader herself, is now in her 12th year coaching the program at her alma mater. In 2014, she helped launch the school’s first competition cheer team, and has seen peaks and valleys along the way.

Charleston Cheer has placed first in regionals three times: 2014, 2019 and 2021. In every year but one, the team has placed in the top three at Regionals. At state, they have earned two top three placements, their highest being second place in 2018.

Assistant coach Wendy Cross was on that first competition team in 2014, and is now helping raise the newest team of student athletes. Cross agreed that this was no throwaway year.

“Our girls have worked incredibly hard this year, and against all odds have come out on top,” Cross said. “It has been an amazing experience and I can not wait to see what they do at State.”

New this year is assistant coach Kris Smith, who said she is extremely proud of the girls and their regional run.

“The girls had a lot of obstacles that they faced,” Smith said. “They have worked as a team and it has been very rewarding.”

“It was not easy to make it to the top, and it will be even harder to stay there,” Williams said. “They fought hard for regionals, but state will be an entirely new day.”

The team has the support of Athletic Director Michael Minner, who is excited to see more of Charleston’s teams competing at the state level.

“They work so hard competing and making us proud,” Minner said. “Coach Williams does a tremendous job and we’re excited to see them compete at the state level this year. We hope they bring home a championship.”

Williams said the battle for a state title only just begun.

“They are really going to have to push to be ready for the level of competition they will see at State,” Williams said but added she recognizes the drive and determination of this group of student athletes. “I have no doubt they can do anything they set their minds to.”

For ticket information, questions, or to support Charleston Cheerleading as they head to State, contact Williams via email at: mwilliams@charleston.k12.mo.us.