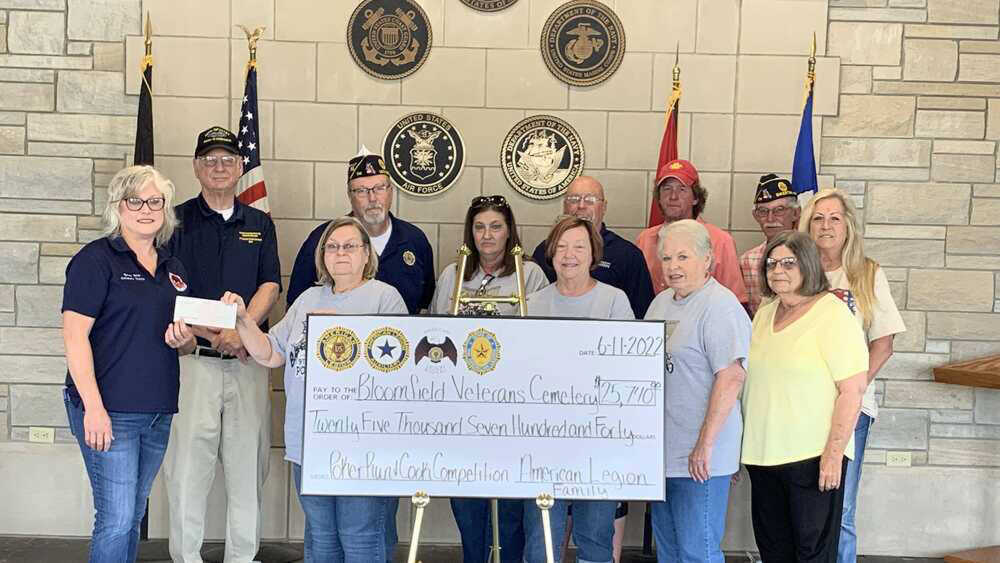 On Saturday members of the Sikeston American Legion and American Legion Auxiliary gathered at the Missouri Veterans Cemetery to make a donation to the cemetery. The donation was in the amount of $25,740.
Josh Ayers/Dexter Statesman

The funds were raised as part of the recent poker run and cook off weekend held in April by the Legion and other sponsors.

Veterans cemetery director Tammy Smith said this has allowed for the installation of the heat, air, LED lighting, sound system and enclosure of the committal shelter. Other beatification projects around the cemetery have also benefited from these donations.. The cemetery is state funded but not everything is covered in that budget.

“The whole interment process for the family, the experience of having to be down here, they have just made so much more comfortable for them,” said Smith. “Grieving is very difficult, you cannot make that easy. But being comfortable when you are having to go through it is a plus.”

“I have so many family friends interred here already and I have been around it in one way or another since its inception in the early 2000s,” said one of the organizers Jimmy Cantrell. “It holds a big spot in my heart. To see what it was and what it is now is amazing.”

Cantrell said the events held over the weekend that raised these funds were a corn hole tournament and the ultimate wing war (chicken wing cook off) held on Friday night. On Saturday was an auction, cook off and poker run.

Smith and the staff at the cemetery participate in the weekend by judging the cook off, which is not a sanctioned state event. One of the events Smith and others judge is the mystery meat class, which is kept secret until the morning of the event. Some of the meats have been head cheese and liver.

Cantrell said the winners of the cook off receive a cash prize which is paid from a separate fund and not in anyway deducted from the donation.

Vickie Wilson with the Sikeston American Legion Auxiliary spoke about what this donation means to the auxiliary.

“It means a whole lot because that is what we are centered around is veterans, anything that has to do with veterans,” said Wilson. “Nine years ago Blair Moran came to us stating that the cemetery needed a new bell tower and system for the funerals so I took it on as my project as district president for the American Legion Auxiliary. And from then on it has been going ever since.”

“If it wasn’t for our sponsors out in the community, we couldn’t do it,” said Wilson. “Our sponsors are our big supporters.”

Wilson and Cantrell both said it takes a lot of people with a lot of input to make the weekend work. Wilson said the event has grown considerably, the first years donation was $9,000 all the the way to this year which was more than $25,000.

“$25,740 is incredible, its an incredible feat and they do it in one weekend,” said Smith.

“We appreciate the outstanding support we receive from the American Legion Post and Auxiliary unit in Sikeston,” said Blair Moran, with the Assistance League. “This represents a great deal of hard work and we would also like to thank our community support given to make the generous donation a reality.”